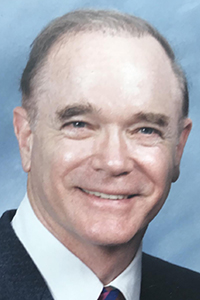 Bruce Barry Bickham, 83, born in Franklinton, on Oct. 6, 1936, as the youngest son of Houston Don and Geneva “Jence” Bickham, passed away peacefully at his home here in Franklinton, surrounded by his loved ones during the early morning hours of May 20, 2020, after enduring a long hard fought battle with Parkinson’s disease.

In his early years, Bruce attended Franklinton High School and was even voted Mr. FHS his senior year. After graduating from Franklinton High School, he attended Southeastern Louisiana University (SLU), where he played football while working on his bachelor’s degree. Afterwards, he transferred to Louisiana State University (LSU), where he attended grad school and became a member of Sigma Chi Fraternity. One day, while attending an LSU football game, he met his lovely wife, Elizabeth Orman Bickham, from Colorado. On May 8, 1963, he and Elizabeth married and decided to make Franklinton their home.

Throughout the years, Bruce has helped numerous people throughout Franklinton and the surrounding areas of Washington Parish as a local small businessman. His family owned and operated Bickham Chevrolet Co., Inc., that in later years became Bickham Motors, Inc. In the early 1960s, Bickham Motors, Inc., became Bickham, Incorporated, the local family-owned and operated small finance/mortgage loan company that is still operating in Franklinton today. Bruce served as the company President, and he took great pride in helping others whenever possible. He was an ever present figure within the company, whether he was extending his hand for a handshake, greeting customers at the door, recounting stories of old with his long-time customers, or putting on his cowboy hat for his daily walk to the local bank and post office.

In addition to being an active local small businessman, he was also a member of the Franklinton Masonic Lodge and the Association for Research and Enlightenment. He was a member of Centenary United Methodist Church, where in years past he led Sunday school classes and took their youth groups on vacations. He had a love for forestry and was in the timber business for many years. He also loved to travel, and he had the opportunity to travel to some incredibly beautiful places, including some in other countries, but there was nowhere that he enjoyed being more than right here at his home in Washington Parish.

He was preceded in death by his loving wife of 49 years, Elizabeth Orman Bickham; his parents, Houston Don and Geneva “Jence” Bickham; and his brother, Hamilton Don Bickham.

Mr. Bruce will be forever remembered for his love and kindness, his cowboy hat and Southern Gentleman charm, his quick wit, and his love and desire to help others. Even upon his death it was his desire to continue to help others, and thus he chose, many years ago, to donate his body to science. The family would like to especially thank Ms. Janice Smith, Ms. Bernie Stewart, Ms. Mary Bufkin, and Community Care Hospice for the care they provided. At the family’s request, in lieu of flowers, donations may be made to Centenary United Methodist Church in his name.