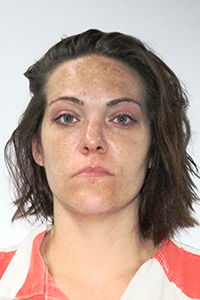 Tylina Lynn Imboden, 33, a resident of Louisiana Highway 436, went to jail for her eighth time on Wednesday, according to Chief Deputy Mike Haley of the Washington Parish Sheriff’s Office.

Haley said that she was arrested by WPSO Patrol Depy. James Gregorio for battery of a dating partner, disturbing the peace, resisting an officer and contempt of court.

“The arrest was the result of Deputy Gregorio’s response to a report of a woman committing battery on a man,” Haley said Thursday. “When Deputy Gregorio arrived at the residence, he observed Imboden’s behavior as she threw a camera at him and the victim. As he began to place handcuffs on Imboden, she pulled away and tried to flee.

“Deputy Gregorio quickly caught up with her, placed her in handcuffs and transported her to the Washington Parish Jail, where she remains with her bond set at $3,000.”

Imboden’s visits to the Washington Parish Jail began in March of 2010, Haley said. Various charges over the years include possession with intent to distribute illegal drugs, driving while intoxicated, theft, burglary, criminal mischief, several traffic offenses, and at least five counts of failure to appear in court.

“Anger management and poor judgment seem to be issues with her,” Washington Parish Sheriff Randy Seal said. “As a young woman, she is carving a treacherous path for herself. Hopefully, someone can intervene and put her on the straight and narrow.”