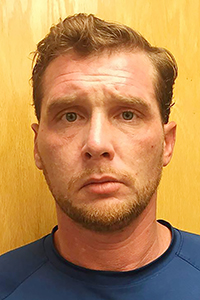 A Franklinton man has been arrested for several recent burglaries, according to information from the Franklinton Police Department.

The FPD responded to a burglary Tuesday at a residence on Manning Drive in Franklinton. The resident reportedly told the police that someone had stolen a dryer from his residence that same day.

FPD officials said that this was the second reported burglary at the same residence during May. The first occurred on May 13, where several household items were stolen. Police also said that there have been five residential burglaries reported on Manning Drive, since May 11.

On Wednesday, FPD Sgt. Chad Dorsett and FPD Sgt. Shawn Rice went to speak with residents on Manning Drive. During the course of the investigation, detectives came into contact with William Robby Cutrer, 39, of 702 Manning Drive, FPD officials said.

Detectives obtained consent to enter the residence and reportedly saw a dryer, which fit the description of the one stolen Tuesday. Cutrer reportedly gave officers several different explanations as to how he had possession of the dryer.

Cutrer was placed under arrest for illegal possession of stolen things. Detectives secured a search warrant for the residence and located several other stolen items taken during the previously reported burglaries, along with drug paraphernalia throughout the house, police said.

The investigation is ongoing, officials said.

While Cutrer was being booked into the Washington Parish Jail after being arrested by the FPD, jail personnel noticed that he had outstanding warrants from the 22nd Judicial District Court.

Washington Parish Sheriff’s Office Lt. Terry Harris responded to the jail and arrested Cutrer again, this time on the outstanding warrants. Cutrer’s bond was set at $5,500.

“With electronic criminal justice data, your past criminal behavior will catch up with you anytime you encounter law enforcement,” Washington Parish Sheriff Randy Seal said. “In Mr. Cutrer’s case, he had the privilege of being booked into the jail twice within a few minutes. Good job, Franklinton Police Department and Lt. Harris.”