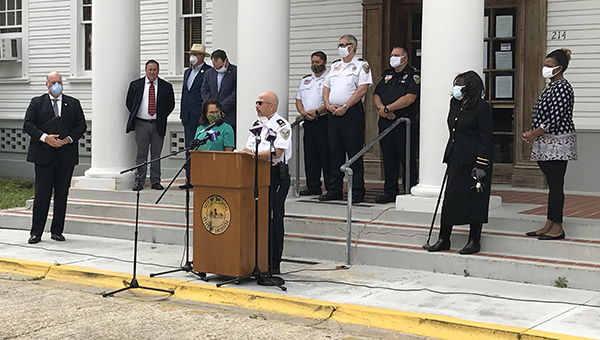 Major Wendell O’Berry of the Bogalusa Police Department said during a press conference Monday that federal law enforcement agencies have joined the investigation into a Saturday shooting incident that injured at least 13 people.

O’Berry — speaking on behalf of Chief Kendall Bullen who could not attend because of a death in his family — told reporters that the New Orleans ATF (Bureau of Alcohol Tobacco and Firearms) Field Division is now investigating as well. The ATF is an agency within the U.S. Department of Justice.

At least 13 people were injured by gunfire Saturday night in Bogalusa, during an incident that took place at approximately 9:12 p.m. in the area of Martin Luther King Drive and East Fourth Street. According to the BPD, a crowd of at least 800 people was gathered in the area for a memorial service for Dominique James, a Bogalusa resident who was murdered several weeks ago.

O’Berry said Monday that the BPD believed multiple victims were injured and in critical condition, but he was unaware of any citizens with life-threatening injuries.

During Monday’s press conference, O’Berry said that the gathering was not permitted.

“Although we extend our condolences to the James family and have been in contact with them during this investigation, there was no permit for this event,” he said. “Under the current COVID-19 crisis, no permit would have been issued, and our agency was unaware that this was going to take place.”

O’Berry said that the BPD had a regular shift of five officers on duty at the time, and made efforts to police the gathering as much as possible. However, they were still on normal shift duty and had to respond to other multiple incidents throughout the day — including accidents and arrests that were unrelated to the gathering.

O’Berry said the BPD was able to find other off-duty officers to help as well, but the gathering quickly grew from 500 people to at least 800.

“The shift supervisor notified me (about the non-permitted gathering) and I advised him to attempt to call out additional personnel and attempt to safely control the situation,” O’Berry said.

O’Berry noted that the BPD began receiving calls reporting gunfire at approximately 9:12 p.m., and when officers arrived on scene there were still shots being fired. He said that a vehicle fled the area during the chaos, and officers also had to respond to a vehicle crash with injuries during the time.

O’Berry said that detectives have been processing the scene, and recovered more than 50 shell casings of various calibers.

“It is believed that multiple shooters were involved in this incident,” he said.

In response to a reporter’s question, O’Berry said that the BPD is also trying to determine who were the organizers of the non-permitted event.

“We’re currently investigating to determine exactly who the organizers are,” he said. “Once we establish that, we will consult with our city prosecutors on any possible charges that we may be able to bring, towards them.

“Generally speaking, I think Bogalusa’s a fairly safe place. But in the midst of a pandemic like this, I don’t know who thought it was a good idea for 500 people or more to gather together and have a barbecue on a Saturday evening. It’s ridiculous.”

O’Berry repeated multiple times that there was never a permit issued, and any suggestion to the contrary was a lie.

“I’ve heard that on Facebook and through social media, that certain people are putting it out that there was a permit,” he said. “There was absolutely no permit, or no permission granted to have this event. To say that it was a bad decision, would be a gross understatement.”

“It is our civic duty to keep the citizens of Bogalusa safe,” she said. “We need the help of the public to do this.”