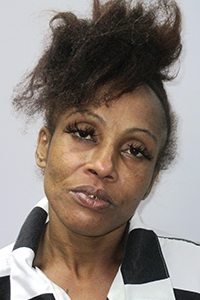 A Bogalusa woman was arrested on drug charges Thursday, after officers reportedly found illegal narcotics in her car after she had run a red light, according to Chief Deputy Mike Haley of the Washington Parish Sheriff’s Office.

According to Haley, WPSO patrol deputies Chad Cassard and Kyle Stogner observed a vehicle run a stop sign in north Bogalusa on Thursday. The driver of the vehicle initially gave a false name, but was identified by deputies as Emelda Deneen Matthews, 40, a resident of Bogue Apartments in Bogalusa, Haley said.

“After a consent search of Matthews’ purse and vehicle, deputies discovered several different types of illegal narcotics,” he said. “Matthews was placed under arrest, at which time she physically resisted both officers. She was subdued and transported to the Washington Parish Jail.”

Matthews was booked into the jail on several traffic charges in addition to two counts of resisting an officer with force or violence, possession of illegal drugs, possession of drug paraphernalia and identity theft. Her bond was set at $10,000.

“Traffic stops are not always simple matters and often lead to more serious charges,” Washington Parish Sheriff Randy Seal said. “In this case, two alert deputies were able get illegal drugs out of our community. As always, I congratulate them on a job well done.”