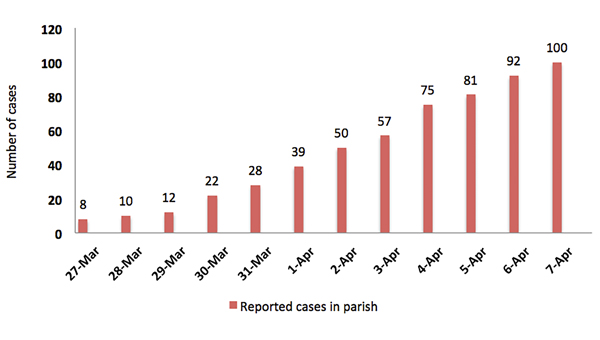 Washington Parish has seen at least 100 reported cases of COVID-19, according to statistics released Tuesday by the Louisiana Department of Health.

The LDH reported at noon Tuesday that there had been 100 reported cases in Washington Parish, with two deaths confirmed — the state had reported 92 cases and two deaths in its Monday update.

The state of Louisiana had reported 16,284 cases and 582 deaths, according to the Tuesday update. On Monday at noon, there had been 14,867 cases reported, and 512 deaths.

As of Tuesday, there had been 63 parishes that had reported at least one case of COVID-19, out of 64 parishes in the state. Only Tensas Parish had yet to see a case.

The state also reported that there were 1,996 COVID-19 patients in hospitals, with 519 of those patients on ventilators.

There had been 320 tests reported from Washington Parish, as of Tuesday’s update.