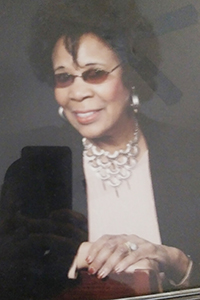 Ruthy was the wife of the late Elder Charles E. Stull of Las Vegas, Nev., and the daughter of the late Deacon Robert and Daisy Perry of Bogalusa. She was the step-mother of Gail Jackson-Manuel, of San Bernardino, Calif.

She earned 75 hours above her master’s degree from the following universities: Southern University-Baton Rouge, University of California-Berkeley, National University-San Diego, Calif., and University of Nevada-Las Vegas.

Elder Ruthy Perry-Stull was a faithful member of the First Presbyterian Church of Las Vegas, from 1990 until her passing. She was very active in her church. She served as a ruling elder, and as secretary/treasurer of the Chancel Choir and Vacation Bible School in 1999. She also served on the Church Officers Nominating Committee, sung in the Chancel Choir (one of the soloists), and was a musician, director and arranger of the Jubilee Singers (a gospel group within the church).

She was the founder of the “Ruthy Perry-Stull and the D’Robert’s Sacred Singers,” a recording group where she served as the lead singer, as the director, as an organist/pianist, writer composer and arranger in preparing music for the group. In 2003, the Chancel Choir of the First Presbyterian Church of Las Vegas toured Great Britain, where she was one of the lead soloists.

In May of 2006, she sung with a Mass choir at Carnegie Hall in New York City, N.Y., under the directorship of the renowned John Rutter.

Before moving to Las Vegas, she resided in Bogalusa and worked for the Bogalusa City School System for 24 years as an eighth-grade math teacher.

While living in Bogalusa, she was very active in spreading God’s word through music. She has been affiliated with the National Baptist Convention of America, state conventions and regional conventions where she served on the administrative staff.

Being a just lady, she touched and molded the lives of many a student and other person as she passed their way.

Surviving to cherish her memories are a host of relatives and friends.

“So long Ruthy, we love you, but God loves you Best.”