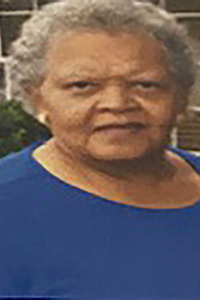 Evelyn T. Warren, 82, a resident of Bogalusa and the wife of the late Walter Warren Sr., passed away peacefully at the Resthaven Nursing Home on Sunday, March 22, 2020.

Mrs. Evelyn was born in Sunny Hill to the late Mr. and Mrs. (Annie Lee Huff) Murray Taylor of Sunny Hill. She was a member of the Salter Chapel A.M.E. Church, under the leadership of Pastor Willie Gautier. She was a retired worker of the Bogalusa Daily News.

The visitation will be held Friday, March 27, from 2 p.m. until 4 p.m. at the chapel of Cook-Richmond Funeral Home. Funeral services and burial will be held graveside at Bogalusa Cemetery on Saturday, March 28, at 11 a.m.