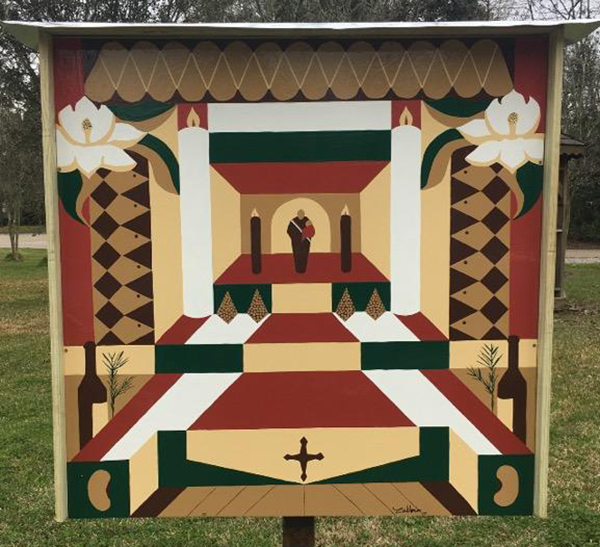 The art was re-done by a Ponchatoula artist, and it is now re-mounted with a new frame and metal roof to protect it from future damages.

People driving along Louisiana Avenue recently may have noticed that the patchwork art piece was missing.

Well, it’s now been reworked and put back up, and looking better than ever. For those not familiar with the artwork, it depicts the St. Joseph’s Altar, which the Italian-American community brought with them to Bogalusa back in 1906, and still endures today.

The original quiltwork was painted on wood and, over the years, the weather took its toll on the sign. Recently, Kathi Mayor of the Washington Parish Tourism Commission contacted Bogalusa council member Teddy Drummond, whose family’s involvement with the St. Joseph’s Altar goes back to over 90 years.

“It was an honor to work on this project,” Drummond said. “With the new frame and the metal roof over it, it should last for many years to come.”

Mayor told The Daily News that the original art apparently fell down after a bad storm in October.

“I called Teddy because I did not want anyone to pick it up and toss it in the trash, before we could see if it could be salvaged,” she said.

Mayor said that Drummond was able to collect the art and return it to her. She then took the piece back to the original artist, Kim Zabbia in Ponchatoula.

Mayor said that the block was funded by a grant from the New Orleans Jazz and Heritage Foundation, and four of the quilt blocks are dedicated to the culture in their location. She said that Bogalusa’s group chose to highlight the area’s Italian heritage when their block was installed in “2013 or so.”

“Kim looked at it and redid the whole thing, as the damage was pretty significant,” Mayor said. “It is now painted on sheet metal, but Teddy remounted it with some protection from future water damage and mold.”