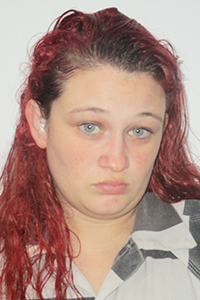 A Picayune, Miss., woman was jailed Friday morning after leading law enforcement officers on a high-speed chase before stopping voluntarily, according to Chief Deputy Mike Haley of the Washington Parish Sheriff’s Office.

Haley said that WPSO Sgt. Jay Dupre was on routine patrol Friday morning, traveling north on Louisiana Highway 21 behind a truck bearing a Mississippi license plate. Haley said that Dupre observed the truck enter the lane of oncoming traffic and pass a tractor truck and trailer along with three other vehicles in an unsafe manner.

“Dupre activated his lights and siren in an attempt to get the driver to pull over,” Haley said. “The driver continued northbound at high rates of speed reaching 100 miles per hour, traveling through the village of Varnado at approximately 80 miles per hour. Sgt. Dupre notified Sheriff’s Office dispatch of the pursuit.”

Haley said that WPSO Sgt. David Cupp was in the north part of the parish at that time, and positioned himself at the intersection of Highways 21 and 1071 along with Angie police officer Dillon Miller. Cupp was prepared to deploy a spike strip to slow the approaching speeding vehicle, Haley said.

“When the driver of the speeding vehicle noticed the officers positioned ahead, she slowed and pulled to the shoulder of Highway 21,” Haley said. “At that time, Sgt. Dupre ordered her out of the vehicle and placed her in handcuffs.”

The driver was then identified as Elizabeth Danielle Bossier, 27, a resident of Lilac Drive in Picayune. A records check indicated that Bossier has never held a driver’s license from any state, Haley said.

Bossier was transported to the Washington Parish Jail, where she was held for aggravated flight from an officer and driving without a license.

“When a driver flees while being pursued by a law enforcement officer, the officer never knows who might be driving the vehicle or whether or not the person is armed or might be wanted for a previous crime,” Washington Parish Sheriff Randy Seal said. “This is always a potentially dangerous situation for any officer. Miss Bossier obviously was driving in an unsafe manner and did not need to be behind the wheel.

“In spite of all this, she likely would have received a ticket and saved herself a trip to jail if she had only yielded to the officer and pulled off of the road when the blue lights and siren were activated. Perhaps she thought she could make it safely across the state line. Who knows? In this case, it did not work out for her.”