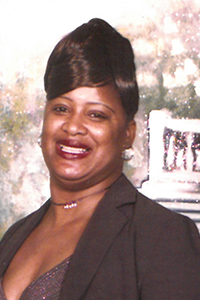 “Trust in the Lord with all your heart and do not rely on your own understanding” (Proverbs 3:5).

Jerry is survived by her four children: two sons, Bobby Joseph Holmes of Atlanta, Ga., and Bobby Dale Holmes of New Orleans, and two daughters, Oveida (Walter Jr.) Williams and Arneka Holmes, both of Atlanta; two grandchildren, as she so affectionately called them, the “JGirls,” Jaylin Holmes and Jalizah Bryant, who were the apple of her eye; five sisters, Ester (Donald) Magee, Ethel “Sis” Holmes and Linda Holmes, all of Bogalusa, Edwina (Hyread Sr.) Mark of Angie, and Tina Holmes of Houston, Texas; four brothers, Joseph (Linda) Holmes of Pearl River, and Walter Holmes, Samuel Holmes and Oscar (Deborah) Holmes, all of Angie; and a host of nieces, nephews, relatives and friends.

She was preceded in death by her parents, Joseph Sr. and Oveda Holmes; brother, Larry Holmes Sr.; and sister, Brenda Holmes.

Visitation will be Wednesday, March 25, at the chapel of Crain and Sons Funeral Home in Bogalusa, from 9 a.m. until 10 a.m., followed by the funeral service at 11 a.m., with the Rev. Julian Carter Sr. officiating.

Interment will be in the Bogalusa Cemetery.