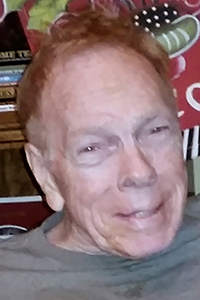 Ernest John Kinkaid Jr. fought and won many battles throughout his lifetime, which was surrounded by family, friends and music, sometimes all at the same time.

Ernie had a talent, a love and a passion for music.

He played piano, and despite having a stuttering problem, he was an elementary school band director for more than 30 years, and taught private lessons and played music jobs even longer.

Ernie survived prostate cancer and fought through a stroke for 5.5 years that affected the right side of his body and left him unable to walk.

Despite the stroke, Ernie worked tremendously hard in rehab and at home with the goal of walking on his own and living an independent life again. Time ran out on his quest to reach that goal, but sometimes the journey is more important than the destination. During that journey, we watched him get stronger, we saw his speech improve and we watch him fight through a very difficult physical and mental situation with the heart of a champion.

In fact, the only thing we didn’t see was his appetite drop. The man loved to eat and he enjoyed his food like nobody else.

Despite the stroke, Ernie continued to practice piano, playing one-handed and played for guests at the house.

The one opponent he was unable to defeat was time.

Ernie was a teacher who cared about his students, a loving uncle, godfather and grandfather, an awesome husband and the greatest father anybody could ever ask for.

Ernie was an inspiration.

He made a positive impact on too many lives to count.

It’s extremely difficult losing such a tremendous person, but we are all very lucky to have had him in our lives.

Ernie is survived by his wife, Mary Louise Greenbaum Kinkaid; three sons, Ernie Kinkaid III, Chris Kinkaid and the late Duane Kinkaid; two late brothers in Leland Kinkaid and Raymond Kinkaid, and many nieces, nephews and in-laws. Chris is the sports editor for The Daily News.

A viewing will take place on Monday, March 23, from 1 p.m. to 1:30 p.m. for family. Friends are welcome for a viewing from 1:30 p.m. to 2 p.m. and burial will follow at Lake Lawn Metairie Funeral Home and Cemeteries.

A memorial will take place at a later date.