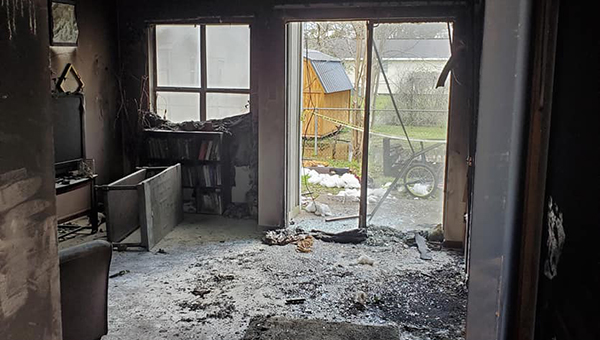 Franklinton Police Chief Justin Brown said that two officers helped save a woman’s life during their response to a Tuesday evening fire.

A quick response by two Franklinton police officers allowed a life to be saved earlier this week, according to officials with the Franklinton Police Department.

FPD officials reported that on Tuesday at 7:23 p.m., FPD Sgt. William Manning and Lt. James Holmes responded to a fire at the Fairground Apartments. Upon their arrival, residents reportedly told the officers that at least one adult and two children were inside the burning building.

According to FPD officials, Manning forced open the apartment door and he along with Holmes entered the burning structure, which was engulfed in smoke. The officers located a badly burned woman who was unable to escape and pulled her from the building to safety.

The officers entered the burning building on three separate occasions in search of occupants and subsequently extinguished the fire. No children were located within the structure, officials said.

Following the incident, Manning was taken to Riverside Medical Center, where he was treated for smoke inhalation.

Franklinton police chief Justin Brown said that the actions of Manning and Holmes saved the life of the female occupant.

“Their selfless efforts, which came at extreme danger to themselves, prevented the fire from spreading to neighboring apartments and potentially claiming the lives of other residents,” he said.

The cause of the fire is still under investigation.

Brown praised the valor of the two FPD officers. Both of them have been submitted for the American Police Hall of Fame Silver Star for Bravery and Life Saving Award.