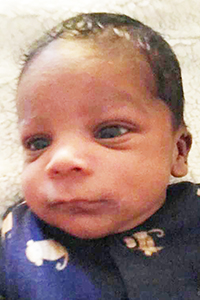 Wynter Kole Douglas was born to Tyishia Sandifer and Willie Tyrell Douglas on Jan. 12, 2020, in Odessa, Texas. Wynter departed his life on Feb. 14, 2020, at Medical Center Hospital in Odessa.

He was preceded in death by a sister; two great-grandmothers; two great-uncles; and one great-aunt.

Funeral services will be held 1 p.m. on Sunday, Feb. 23, at Crain and Sons Funeral Home in Bogalusa.