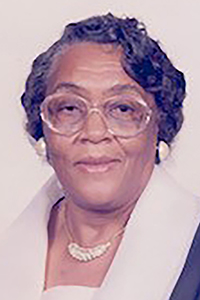 “Whatever you do, work for the Lord and not for me, knowing that from the Lord you will receive the inheritance as your reward. You are serving the Lord Christ” (Colossians 3:23-24).

May the work I’ve done speak for me.

Jessie Mae Peters Magee was born on Aug. 18, 1932, to the late Jessie and Julia Platter Peters in Angie. She departed this life peacefully at home with family and friends in Angie on Feb. 10, 2020, at 4:55 p.m. She attended school at Wesley Ray High School in Angie. Sister Magee grew up on a farm and learned the value of hard work. She worked as a domestic and factory worker until she became disabled.

Sister Magee was affectionately known as “Kitty” and to her children as “Madea.” She joined the Ford’s Chapel Baptist Church in Sandy Hook, Miss., at an early age and was baptized. She was an active member of the Fourth District Usher Board and Choir. Later in life, she moved her membership to Center Baptist Church in Angie, under the leadership of the late Rev. L.W. Bolton. At Center Baptist, she faithfully served on the Usher Board. In 2015, Sis Magee returned to her roots and reunited with the Ford’s Chapel Baptist Church under the leadership of Rev. Archie McGowan. Due to her health, she was unable to attend church on a regular basis; however, she supported the church financially and looked forward to the church deacons coming by her house monthly to serve communion.

Sister Magee loved her family and community. She enjoyed speaking about the accomplishments of her children and grandchildren. She loved to call her son “L.V.,” who was always by her side daily to care for her. She also enjoyed going on family vacations. Her most memorable vacation was a tour of the White House in Washington, D.C., under President George W. Bush-43. She was unable to walk up the stairs so the tour guides provided her with a wheelchair and allowed her to use the president’s elevator. She was so proud of that moment. She came out of the elevator waving her hands and smiling as if she was a queen.

Funeral services will be held on Saturday, Feb. 22, at 11 a.m. at the Ford Chapel Baptist church, with the Rev. Archie McGowan officiating. Visitation will begin at 10 a.m. until the time of the service. Interment will be in the Ford Chapel Cemetery.