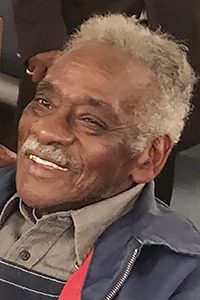 “Baby Ray” attended Wesley Ray High School, where he graduated and soon after joined the Army. After serving two years in the military, he then went on to become the third African-American sheriff in Washington Parish.

Robert James Moses was a reliable, hard worker and it showed with his 43 years of being a Gaylord employee, where he retired.

He leaves his undying memories to his two sons, Barnett (Katherine) Moses of Semmes, Ala., and Golden Ootsey Jr. of Angie; one daughter, Cynthia (Golden Ostsey Sr) of Baton Rouge; One sister, Willow Faye Owen of Hammond; one god-child, Tiphanie Lewis of Angie; 11 grandchildren; 15 great-grandchildren; and a host of nieces and nephews and other relatives and friends.

He was preceded in death by his wife, Claudia Mae Moses; his parents, Beatrice and Robert T. Moses; two sisters, Gloria Dean Moses-Pigott and Joyce Moses Dixon; and one brother, Calvin Moses.

Baby Ray has finally made it. He is now at home.