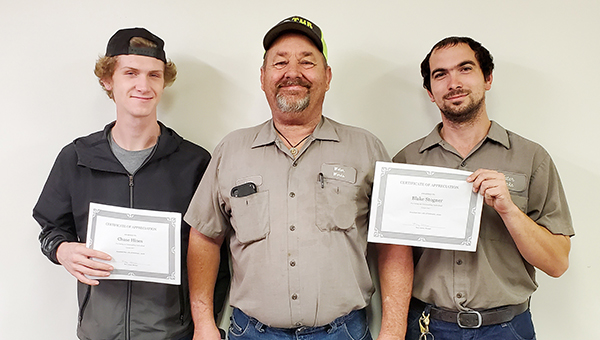 Varnado Waterworks is very proud of two of its employees, who happened to be in the right place at the right time.

Mary Adams, office manager for Varnado Waterworks, told The Daily News that Blake Stogner and Chase Hines were taking care of a work order in the Bogalusa area when they pulled up to a residence and heard a child crying. They also observed a large dog on a chain.

Adams said that the dog reportedly had the child by the waist in his mouth. The two of them were able to pull the dog off the child and then took the child up to the house to safety, Adams said.

Adams said that the employees later found out that the child was taken to the hospital and required surgery for the injuries.

“Thanks to Blake Stogner and Chase Hines for their quick action, which may well have saved a child’s life,” she said.

Varnado Waterworks staff awarded each employee with a certificate of appreciation.