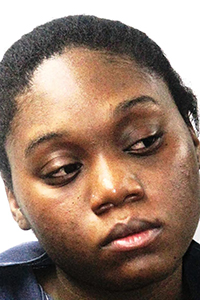 On Thursday, WPSO patrol deputy Dalton Manning was patrolling on Louisiana Highway 10 when he noticed a vehicle being driven in an unsafe manner, Haley said. He stopped the vehicle and discovered the driver, Briasia McGee, 21, a resident of Trappers Road in Independence, was wanted by the Tangipahoa Parish Sheriff’s Office on outstanding warrants.

Haley said that Manning issued traffic citations to McGee, then arrested her and transported her to the Washington Parish Jail. After being booked as a fugitive, McGee was transferred to the Tangipahoa Parish Jail to face charges there.

“Once again, an alert deputy was able to make a good arrest,” Washington Parish Sheriff Randy Seal said. “We are always pleased to partner with our neighboring parishes and assist them in any manner we can. They do the same for us. Those who are trying to escape the law will eventually be caught.

“Our deputies remain vigilant at all times and constantly patrol our highways, even when most of us are in our homes asleep. I am so grateful for all they do for all the citizens of Washington Parish.”