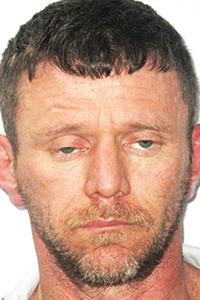 An Angie man was arrested this week, as a fugitive who had an outstanding warrant from St. Tammany Parish, according to Chief Deputy Mike Haley of the Washington Parish Sheriff’s Office.

“Sgt. Cupp was on patrol north of Bogalusa when he observed a vehicle traveling at a high rate of speed,” Haley said. “After a short pursuit, Sgt. Cupp stopped the vehicle near the intersection of Highways 21 and 436. It was determined that the driver, Shaun Travis Hobgood, was wanted on an outstanding warrant from St. Tammany Parish.”

“We were glad to assist the St. Tammany Parish Sheriff’s Office by arresting Hobgood on their warrant,” stated Sheriff Randy Seal. “Anytime a person is wanted for a criminal violation, the information is stored in a national criminal justice data base.

“No matter where the person might travel in the United States, that information is instantly available to law enforcement. It is fruitless to attempt to flee from legal obligations. Thank you, Sgt. Cupp, for being alert and pro-active.”