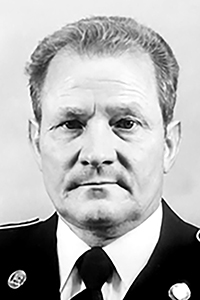 Doy Elzie Cothern passed away peacefully on Feb. 1, 2020, at the age of 83. Doy was born on July 1, 1936, and was the son of late Mr. and Mrs. Porter Cothern. He lived in Bogalusa all of his life and graduated from Bogalusa High School with the class of 1955.

Doy spent many years of his life with the Army National Guard, with over 31 years of service to his country. His last 11 years, he served as a Recruiter, retiring as a Sergeant First Class. Upon his retirement from the Army National Guard, he spent time with his family and friends, and his life companion of 12 years, Nelda Woodward. He was a member of First Baptist Church and enjoyed volunteering his time to not only the church, but the community he loved. Additionally, he was a member of the Magic City American Legion Post 24 and Forty & Eight Voiture Local 1360. He was the founder of Pearl River Conversation, Inc., and served as President from 1990 through the present.

He is survived by his children, Lisa Maddox (Terry) of Slidell, Ann Scott Barnes of Bogalusa, Robyn Kennedy of Covington and Blaine Williams (Don) of Lafayette; one brother, Harold Cothern of Natchez, Miss.; one sister, Irene Wilson of Kingswood, Texas; 10 grandchildren and 10 great-grandchildren.

The family would like to thank the staff of Tulane Medical Center and many others for the incredible and supportive care given to Doy during these last few weeks.

Friends are invited to attend a visitation on Saturday, Feb. 8, from 9 a.m. until noon at the First Baptist Church in Bogalusa. Immediately following the visitation, a church service will be held at noon, followed by a gravesite service with military honors at Ponemah Cemetery. Arrangements have been entrusted to Poole-Ritchie Funeral Home & Crematory. Condolences may be shared on the Poole-Ritchie website at: www.pooleritchiefuneralhome.com.

The family requests that in lieu of flowers, any donations can be made to the First Baptist Church of Bogalusa.