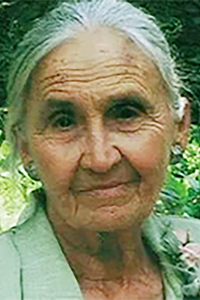 Mrs. Margie Louise Yates Jenkins died on Jan. 29, 2020, after living a full life of 98 active and magnificently productive years. She was born on Sept. 5, 1921, first of the six children of Fred Whithurst Yates and Camille Gardner Yates, both of whom were second generation members of frontier families who had settled the Florida Parishes.

While rearing her own family and keeping the grueling hours of a “dairy wife,” Mrs. Jenkins became fascinated with the preservation of plants she found to be native to the valley and ridges along the Little Tchefuncte River which separates Washington and Tangipahoa parishes. This grew into a lifetime avocation for her, and as Jenkins Farm and Nursery enlarged and prospered, her recognition as a botanical authority spread across the Gulf States. She attended and appeared as guest speaker and lecturer each year at conventions and work sessions of botanical groups throughout the South; and on the home front, she operated the Jenkins Nursery, where she worked, serving customers, each day of the week preceding her death.

In 2018, she became the first woman to be inducted into Louisiana’s Department of Agriculture Hall of Distinction. Mrs. Jenkins also held membership in the International Plant Propagators Society, and in seven statewide professional associations throughout the South. Lately anticipating the end of her journey, Mrs. Margie told her daughter, Margie Ann, that she looked forward to growing azaleas in the Garden of Eden.

Visitation will be held at Hillcrest Baptist Church (2201 Washington St. in Franklinton), from 5 p.m. until 9 p.m. on Sunday, Feb. 2, and will continue on the morning of Monday, Feb. 3, from 9 a.m. until the service at 1 p.m., to be conducted by the Rev. John Robson and the Rev. Tommy Smith. Burial will follow at the Martin Van Buren Hughes Cemetery on the Jenkins Farm, south of Louisiana Highway 16, on the ridge overlooking the Tchefuncte River Valley.

In lieu of flowers, the family requests that donations be made to the Margie Y. Jenkins Azalea Garden at the LSU AgCenter’s Hammond Research Station. Please make checks payable to the LSU AgCenter and write “Margie Jenkins” in the memo field. Memorial donations can be mailed to 21549 Old Covington Hwy., Hammond, LA 70403. The Margie Y. Jenkins Azalea Garden was established in 2006 to honor, share and teach about the contributions Ms. Margie made to the nursery and landscape industry by displaying her favorite plants — including azaleas and natives or donations to the Louisiana Nursery and Landscape Foundation for Scholarship and Research “Margie Y Jenkins Scholarship Fund” mailed to LNLFSR, PO Box 1447, Mandeville, LA 7047.

Obituaries can be viewed online at www.crainfh.com