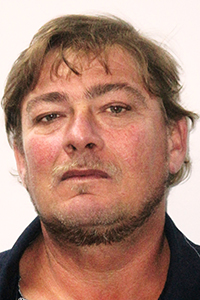 Timothy T. Rodosta, 43, a resident of Adolphus Road in Covington, has been in the Washington Parish Jail since his arrest on Friday.

Washington Parish Sheriff’s Office Chief Deputy Mike Haley said that the arrest was the result of an alert WPSO patrol sergeant, who spotted Rodosta behaving in a suspicious manner in the parking lot of a gasoline station south of Bogalusa.

When Sgt. Jay Dupre approached Rodosta to question him about his suspicious behavior, he observed drug paraphernalia in plain view inside Rodosta’s vehicle, Haley said.

“After obtaining permission from Rodosta to search his vehicle, Sgt. Dupre discovered a pistol and black gloves,” Haley said. “In addition, Rodosta was wearing a black stocking on his head, which seemed suspicious. Examination of the stocking revealed hand-cut holes for a person’s eyes and mouth.”

“Excellent, pro-active law enforcement,” Washington Parish Sheriff Randy Seal said. “It seems likely that Sgt. Dupre prevented a possible robbery. I congratulate him for being alert and for handling this matter.”