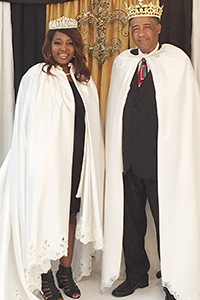 The king and queen of this year’s parade in Angie are the Rev. Jesse Moses and Phlesher Mingo.

The Concerned Citizens of Varnado and Angie Community will sponsor their annual Dr. Martin Luther King Jr. parade and service on Saturday, Jan. 18, in Angie.

The community parade will begin at Angie Junior High School at 1 p.m. and proceed to Wesley Ray Elementary School, where a program is planned followed by refreshments. Each church is asked to participate in both the parade and program. The public is invited.

The King and Queen for this year’s celebration are members of New Zion Missionary Baptist Church, in Varnado, where the Rev. Dr. Linza R. Cotton is pastor. The 2020 royalty are the honorable King, the Rev. Jesse Moses and honorable Queen, Ms. Phlesher Mingo.

King Moses is the second son of the late Samuel Moses and Catherine Mingo Moses. He is a native of Varnado and a 1969 graduate of Varnado High School. He is the proud father of four sons and two daughters, who blessed him with 12 grandchildren.

Rev. Moses has a life of service to God and the community. He was ordained and licensed as a Minister in 2001 at New Zion Baptist Church where he is presently an Associate Minister. His work at the church includes but is not limited to, teacher of Men’s Sunday School class, member of the Brotherhood Choir, Outreach Ministry to Nursing Homes, former Church School Superintendent, former Young Disciples for Christ Counselor, and former deacon. King Moses retired from Temple Inland after 42 years of employment.

Queen Phlesher Mingo is the fourth child born to the late Arthur Ray Mingo and Ruby Lee Mingo. Her grandparents are the late James and Grace Foster and the late Gabriel and Nancy Mingo. She is the proud mother of three: Jafonzo, LeDarven, and Myleeza Mingo. In addition, Queen Phlesher has four loving grandchildren: Amond and Alecya Mingo, Jayceon Davis, and ZaKhya Woods.

A proud native of Varnado, Phlesher graduated from Varnado High School as an honor student in 1987. After discovering a love for children and education, she continued her education at Southern University of Baton Rouge where she majored in Early Childhood Education. Ms. Mingo graduated from Southern University in 1992 and began teaching in the Bogalusa City School System shortly thereafter. With her understanding of children’s early learning skills, Ms. Mingo was known as the “Dancing Teacher” due to her upbeat and modern style of teaching. Her educational motto is “Children don’t care what you know until they know that you care.”

After 10 years teaching in the classroom, Phlesher decided to tap into her “God given” talent of counseling. In 2004, Phlesher enrolled at University of Southern Mississippi and obtained her master’s degree in Psychology; Guidance and Counseling. As Ms. Mingo finished her last class of her master’s program, she was offered a higher position within Bogalusa City School System as the Pre-School Coordinator. This position made her responsible for overseeing all Early Childhood Programs for Bogalusa City Schools.

Queen Phlesher didn’t stop there! In 2011, Ms. Mingo returned to the University of Southern Mississippi and obtained her second master’s degree in Educational Leadership. During her last semester of the Educational Leadership program, Ms. Mingo became the Principal of Byrd Avenue Elementary School. As much as Ms. Mingo loved her staff and children at Byrd Avenue, she knew God was leading her to a higher calling. Beginning in 2012 until present, Ms. Mingo carries the title of Supervisor of Child Welfare and Attendance for Bogalusa City School System and is also the Quality and Compliance Manager and Counselor for Brightside Social Services.

Phlesher is a faithful member of New Zion Missionary Baptist Church in Varnado. She serves as a member of the Sr. Choir and Welcome Committee. Ms. Mingo has a passion for community service serving as a guest speaker and MC for several events around the Washington Parish area. Ms. Mingo loves the Lord and always says “Let the Life I live speak for me!” Ms. Mingo’s favorite scripture verse comes from Philippians 4:13 “I can do all things through Christ who strengthens me.”

Queen Phlesher would like to dedicate this royal celebration to her late father and hero, Mr. Arthur Ray Mingo, for laying the foundation of honoring those who fought so hard to ensure that African-Americans in our communities are granted the same honor and privileges as other races. Ms. Mingo followed in her mother, Ruby Mingo and grandmother, Grace Foster’s footsteps with serving others before serving self.