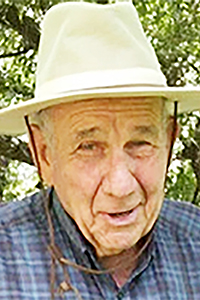 Zelos Newton “Zeke” Williams, 90, a resident of the Enon community, died Friday evening, Jan. 10, 2020, at his home, surrounded by his beloved family.

Zeke was a native of Winnsboro. He was a U.S. Air Force veteran of the Korean War, during which time he was stationed in Japan. Zeke received his bachelor’s degree in Agriculture from LSU and had a long career with the Louisiana Department of Agriculture. He was a soil conservationist and later retired as the District Director of Washington and St. Tammany Parishes.

Zeke was an avid LSU sports fan that loved to watch and listen to the Tigers football and baseball teams. He loved working in his yard and gardening and often had many different gardens that he worked near his home. Zeke was also an avid fisherman and always enjoyed fishing with his buddies Tommy Casanova, Frank Green and J.D. Breland.

He was a longtime member and Deacon of Enon Baptist Church, where he was currently a Deacon Emeritus. He loved his church family and always took pride in bringing his entire family to church, where as kids they all sat quietly on the same bench. Zeke was truly a people person and enjoyed visiting with all the folks he met. He was a loving husband, father and grandfather that cherished the quality time spent with his family.

The family wishes to express a sincere thank you to his caregivers through the years — Betty Sue Jones, Angie Fornea, and Toni Lemly, to Dr. Chris Foret and his nursing staff, and to Heritage Hospice for their support during these last months.

In lieu of flowers, the family prefers donations to the Enon Baptist Church Renovation Fund or its Blessing of the Food Fund.