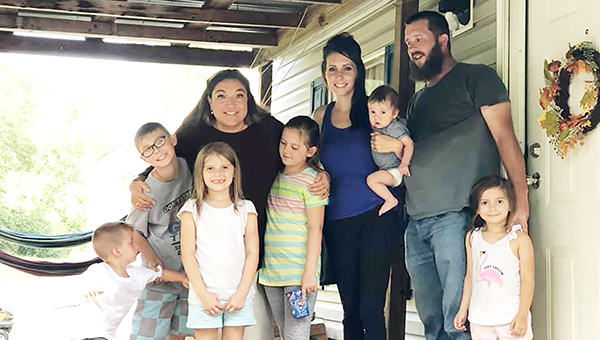 Being a parent can sometimes feel like being a superhero, but when the pressure gets to be too great, the person to call is “Supernanny” Joanne Frost.

In January of 2019, Brittany and Ralph Richardson of Isabel applied for their family to be featured on Frost’s television program, “Supernanny,” on the Lifetime Network. The show’s producers selected the Washington Parish family, and a crew spent nine days filming the episode in July and August.

That episode will debut on Lifetime Network tonight, Wednesday, Jan. 15, at 9 p.m.

“It’s really exciting,” Brittany said. “Our kids were nervous about being on TV at first, but you get used to it. We haven’t seen the full episode yet either, so we’re excited to see how it all looks in the end.”

Brittany said that she decided to apply for the show because of some trouble that her family was going through. She and Ralph have six kids, ranging in age from 10 years old to 9 months old. The four oldest children are from Brittany’s previous marriage, and their father recently passed away.

Brittany said that the passing of the four oldest children’s father only accelerated some of the conflicts and strife.

“We had some issues with our children even before his passing, and then once he died things just started to get a little rougher even more,” she said. “That was the story that the producers were interested in exploring.”

Brittany said that Frost was a godsend for her family, and they learned a lot in the time that the British superstar visited Louisiana.

“She gave us some tools to help with the grieving process,” Brittany said. “She was really big on helping us understand what we could do as parents to help the children cope with the loss of their father. She was very good at helping us to see things from the children’s perspective, and not just from our perspective as parents.”

Brittany said that most of the episode is set at the family’s home in Isabel, although they do pay a visit to Sunshine Snowballs in Bogalusa, and Sweet Rolls in Covington, along with the father’s grave in Covington. She said that Frost really seemed to enjoy her visit to the southern United States.

“I was talking with Jo and she mentioned that this was probably one of her first times visiting this part of the country,” Brittany said. “She loved the hospitality and the food.”

Brittany said that Frost has continued to stay in touch with the family, and ensure that they are still doing all right.

“It’s really nice that she does that,” she said. “It’s not like, ‘we’re done filming and now it’s over.’ She continues to do follow-up calls with us and make sure that everything is still going OK.”

Brittany said that her family still has its rough patches, but the visit from Frost has really been a positive experience.

“My advice to parents who are in a similar situation is just not to give up,” she said. “Try your best to work out the situations that need to be fixed. Don’t give up on each other. It can turn out to be something beautiful.”