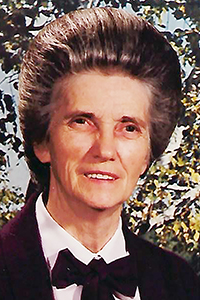 Mrs. Estelle Wilson Stewart passed away peacefully at her home in Bogalusa on Thursday, Jan. 2, 2020, at the age of 100. Born on March 11, 1919, in Hattiesburg, Miss., she was a long-time resident of Bogalusa. She was a member of First Pentecostal Church of Bogalusa, where she loved attending with her sister, Elouise Mizell. She was a wonderful mother and homemaker who enjoyed crocheting, quilting, and making red-velvet cakes.

Friends and relatives were invited to attend visitation on Monday, Jan. 6, from 10 a.m. until 2 p.m. at Brown McGehee Funeral Home in Bogalusa, with the funeral service following at 2 p.m. in the funeral home chapel. Officiating were Brother Travis Houston and Brother Lynn Martin. Interment immediately followed at the Mt. Pleasant Baptist Church Cemetery in Bogalusa.

The family may view and sign the guestbook online at www.brownmcgehee.com.