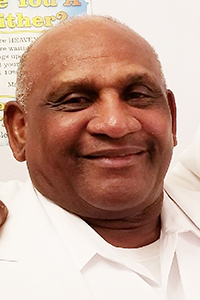 Joe N. Spikes Sr. was called home to be with the Lord on Sunday, Dec. 29, at the age of 71 at Our Lady of the Angels Hospital in Bogalusa.

Joe attended Wesley Ray High School and graduated. He worked at Gaylord Papermill until he retired. He was very active with the Angie Pee Wee Football League.

He was preceded in death by his beautiful wife for 41 years, Betty Jean Foster-Spikes; and a son, Eldrick Spikes.

The funeral service was Saturday, Jan. 4, at 1 p.m. at Holy Temple C.O.G.I.C. in Angie. Visitation began at 10 a.m. and continued until the time of the service. Superintendent Leslie Fields officiated.

Interment was in the Foster Cemetery in Varnado.

Cook-Richmond Funeral Home was in charge of arrangements. Sign the guestbook online at www.cookrichmondfuneralhome.com.