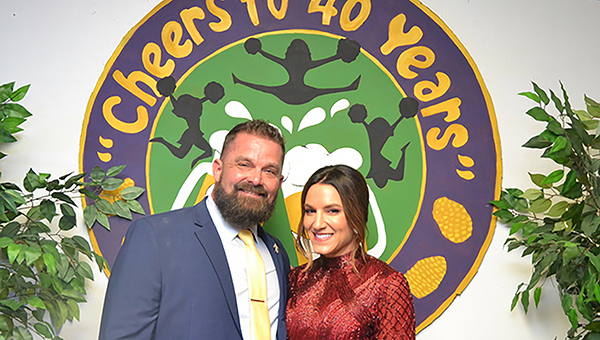 Terry W. Pierce Jr. is a lifelong resident of Bogalusa. He is the son of Terry “Ted” Pierce Sr. and Mary Magee Cothern. He is married to Tammy Seal Pierce and together they share four beautiful daughters, Natalie Pierce, Emily Pierce, Briana Wanner (Jordan) and Kayla Elieff. They have been recently blessed with their first grandchild, Jordan “Jordy” Wanner Jr.

Pierce is a graduate of Bogalusa High School and has been employed locally with International Paper for 20 years. He is a member of Annunciation Catholic Church and the Knights of Columbus. He is an active member of the Bogalusa Country Club, where he served on the Board of Directors for several years, and currently serves on the Board of Directors for the Men’s Golf Association. His hobbies include playing golf, hunting, and enjoying time with his close friends and family.

Pierce is a proud, longtime member of the Magic City Carnival Association (MCCA). He is a senior member of the Den of Wahoo, where he has served as Lieutenant and Treasurer in past years and is now honored to reign as the fifth Wahoo King. He has also represented his Den and MCCA as a Duke for MCCA XXVI and MCCA XXXIV. All four of his daughters have served as Maids on the Royal Court as well.

Pierce has been involved with MCCA since he was a child, and grew up dreaming of one day having the privilege of being King. His stepmother, the late Ann Pierce, reigned as Queen MCCA VIII. He was part of the Royal Court for MCCA X and will make history as the first King to have served as a past Royal Guard.

Pierce is beyond excited to reign as King and even more thrilled to reign over such a momentous 40th Anniversary year, which includes the largest Royal Court in the history of MCCA. He looks forward to sharing a fun and eventful Mardi Gras season with everyone.

Amber Michelle Scott is a resident of Bogalusa and is married to King MCCA XXXVIII, Stamper Scott. They are blessed with four children, Taylor, Tyler, Chandler and Anabeth Scott, and have been recently blessed with their first grandchild, Camille Scott. All children have served as guards and pages for MCCA in previous years. Taylor and Chandler has continued the family tradition by becoming members of MCCA and Taylor currently serves as Lieutenant for his Den.

Scott and her husband own a local construction company, Scott Construction and Welding, LLC. She is a member of Westside Emmanuel Baptist Church and an active member of Dogwood Ladies League. She is also a charter member of Ladies of Vogue.

Scott was a Maid in the Royal Court of MCCA XXII and will make history as the first Consort and Maid to reign as Queen. She was surprised when asked to be Queen for this magical 40th Anniversary Mardi Gras season and is very honored to reign as Queen MCCA XL, which includes the largest Royal Court in the history of MCCA.

She is anticipating a marvelous season with her King, Royal Court, family and friends.