Music star gives back to his city 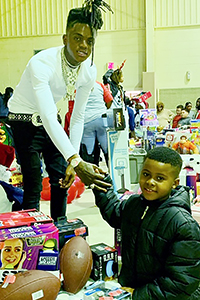 Bogalusa native Javorious Scott, also known at rap musician JaDaYoungan, greets a youngster at the Dec. 20 giveaway sponsored by Scott and his family.

A Bogalusa native who has hit it big in the professional music industry recently paid visits during the holidays to give back to his community.

Javorious Scott, who uses the alias of “JaDaYoungan” in most of his music, has had a number of recent successes. His recent album, Misunderstood, has over 40 million streams and peaked at No. 43 on the Billboard 200 chart. He has also had two other albums make the chart — Endless Pain at No. 70 and Forever 23 at No. 86.

Scott, 21, has not let the success to go his head, however.

At Thanksgiving, he helped put on a turkey and ham giveaway, where he was able to bless approximately 300 families with food, Jefferson-Collins said.

She also said that Scott and his family helped put on a toy giveaway on Sunday, Dec. 22, at the Poplas Quarters Recreation Center in Bogalusa.

“Over 500 kids and their families came out and received food and multiple gifts,” she said. “The parents even received door prizes. As the event took place, he reminded the kids that they must never forget where they came from, and always give back to the community.”

Jefferson-Collins said that Scott also received gifts that day, as family members gave him baby items since he is expecting his first son.

Scott has said that some of his influences include Louisiana hip-hop legends such as Lil Wayne, Kevin Gates and Lil Boosie. He got into music at an early age and released his first mixtape, Ruffwayy, in early 2017 when he was 18.

He has since achieved a substantial following, especially in online social media. As of publication, he had 1.9 million followers on Instagram.