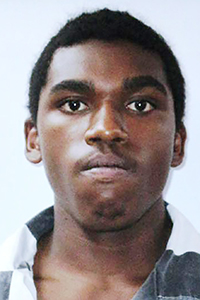 Gerroy Mykala Gould, a 21-year-old resident of Sandy Hook, Miss., was arrested by the Washington Parish Sheriff’s Office for two business burglaries which occurred in Angie along Highway 21.

On Tuesday, a burglary in progress was interrupted by Lt. Chris Hickman and deputy Chad Cassard. When officers arrived at the scene, they discovered Gould hiding behind the business wearing a camouflage jacket and a medical mask. Nearby was a crow bar, which had been used to attempt entry into the business and a black pair of socks which Gould had been using as gloves. Gould confessed to the attempted burglary, after which he was arrested and transported to the Washington Parish Jail.

On Wednesday, another business reported an attempted burglary and all evidence pointed to Gould as the burglar. During interrogation by Detective Captain Tom Anderson, Gould confessed to that burglary as well.

“As I recall, it was Aristotle who said something to the effect that all rascals are not thieves, but all thieves are rascals,” Seal said. “I cannot disagree with that statement and I am glad this particular rascal has been caught, cuffed and jailed. Good job, officers!”