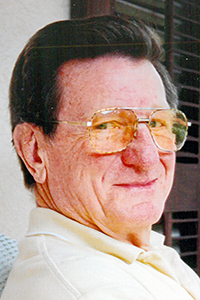 After a long and happy life, Charles Marion Hughes passed away on Dec. 15, 2019, at the age of 90 at home peacefully with his family.

Charles was born on Sept. 16, 1929, in Hammond, to Jefferson D. Hughes and Catherine Beyer Hughes. He earned a degree from LSU School of Forestry after which he served with the United States Army Artillery as a first lieutenant in the Korean Conflict.

Charles was much loved and respected by his family and community and will be remembered and missed by all.

Relatives and friends are invited to attend a memorial service at 11 a.m. on Wednesday, Dec. 18, at E.J. Fielding Funeral Home, located at 2260 W. 21st. Ave. in Covington.

Visitation was on Tuesday, Dec. 17, from 6 p.m. until 8 p.m. and will continue on Wednesday from 9 a.m. until the service time.

Interment will be in Southeast Louisiana Veterans Cemetery in Slidell.

Share a memory on the tribute wall online at www.ejfieldingfh.com.