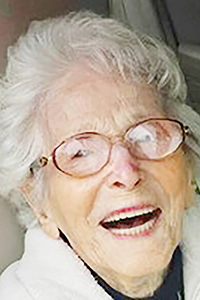 Mrs. White was born on Oct. 10, 1916, in Bogalusa. She grew up in Bogalusa, graduated from Bogalusa High School in 1935 and was a lifelong resident of Bogalusa except for 1955 when the family lived in Antioch, Calif.

Camille was a devout Catholic, attended Annunciation Catholic Church in Bogalusa and was awarded the Order of Saint Louis of the Archdiocese of New Orleans.

Having outlived all of her contemporaries, she made new friends easily through the twilight of her years. This petite lady had a friendly manner and pleasant disposition. She loved to laugh and reminisce and did not hesitate to tell stories on herself.

She also had a tenacity of purpose when it came to moving around. She was active till the end of her life thanks to her own will power and a small cadre of friends who made the time for her when she needed help. She tumbled, danced, jazzercised and aerobicized her way through life.

Camille was devotee of all things chocolate. She never lost her desire for a good meal or dessert, despite tipping the scales below 90 pounds. As she often said of others, she “had a good appetite!”

She will be missed.

Her arrangements have been entrusted to Poole-Ritchie Funeral Home & Crematory. A Mass and Memorial Services will be held at Annunciation Catholic Church on Thursday, Dec. 19. Visitation will begin at 9:30 a.m. and continue until mass begins at 11 a.m. Rev. Father Daniel Brouillette will officiate. Interment will follow at Ponemah Cemetery in Bogalusa.