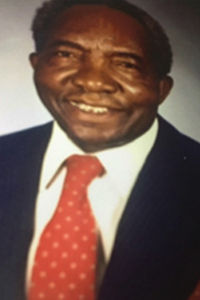 Virgil Mondy was the fourth child of 14 children born to the union of the late Floretta Brown-Mondy and the late Teman Mondy, on December 1, 1926; he was called home by the angel of the Lord on Sunday, November 24, 2019. He was a lifelong resident of Angie.

Virgil joined Wesley Ray United Methodist Church at an early age and remained a faithful member until his illness and untimely death, he served on the Usher board, Male Choir and as a Trustee. Virgil was a faithful participant of every auxiliary of the Church and was pillar of the Angie community and a loving family man. He was a 1947 graduate of Wesley Ray High School.

Virgil was a World War II Veteran and immediately upon his untimely departure from this earth, he was honored with a “Red, White and Blue” service on November 24, 2019 at St. Tammany Parish Hospital, in Covington, La.

Virgil was also a very hard working man, his careers included: welder, certified mechanic, a Washington Parish Deputy Sheriff, owned and operated dump trucks and pulpwood trucks. Upon retirement, he was “The Paper Man”, which was the job he enjoyed most because he could talk and visit people as he delivered newspapers for over 20 years.

Virgil was an avid sports fan, but baseball was his favorite. During his younger years, he attended many professional baseball games in Houston, tugging his only son, (Treanders Aparicio Mondy), along with him… Loving all sports, it’s not surprising that God gave him the desires of his heart and later sent him two Professional Football players (a Son-in-law and a Grandson) via his namesake. Vergie Lee Mondy-Brooks…he also attended two Super Bowls that his son-in-law actively played in with the Washington Redskins. Virgil was also blessed to have a granddaughter that’s employed in the White House.