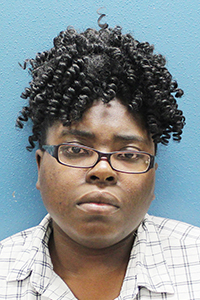 Tanner said that Roneka Allen, from Sugar Land, Texas, arrived at RCC on Saturday to visit an offender.

“As a part of the visitor processing procedure, Ms. Allen was required to pass through a body scanner,” he said. “After being scanned, the officers noted an irregularity, and after questioning, Ms. Allen admitted to security staff that she was in possession of contraband.”

Allen was questioned and turned over to the Washington Parish Sheriff’s Office, where she was arrested and charged with introduction of contraband into a penal facility. Her vehicle was also impounded by the WPSO.

Tanner warned anyone else who may try to bring drugs into RCC.

“Body scanners, similar to those at airports, are now being used at RCC and other DOC facilities to detect and stop the flow of contraband into our facilities,” he said. “RCC also uses several other types of drug detection equipment and methods to make this facility as safe as possible for the employees, visitors and offenders.

“We intend to hold those who bring drugs and other dangerous contraband into our facility accountable for their actions.”