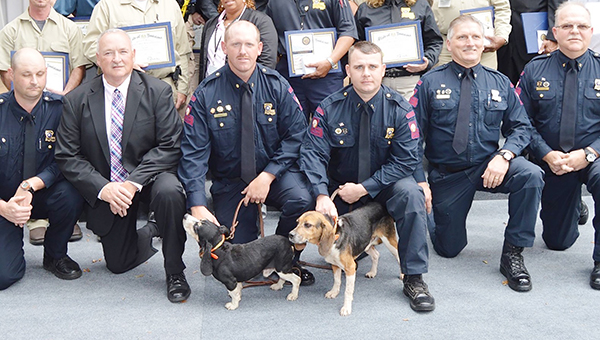 On Nov. 22, the Louisiana Department of Public Safety and Corrections held their Employee Memorial Service and Annual Awards Ceremony in Baton Rouge. A group of employees from Rayburn Correctional Center (RCC) were recognized by Secretary James LeBlanc for their heroic actions in two incidents that occurred during the past year.

In the first incident, the Mississippi Highway Patrol requested the assistance of Rayburn Correctional Center’s K9 Unit on Jan. 1, 2018. The officers arrived at the scene in Lawrence County, near Jayess, Miss., at approximately 3:40 p.m., where they met with local law enforcement officials.

The officers were briefed on the situation, advising them that earlier in the week the suspect had killed a neighbor over a property dispute by shooting him and then setting him on fire. The suspect went to the neighbor’s house, critically wounded the neighbor’s wife, who later died, and burned their house down. The suspect had then gone to a nearby mobile home where he threatened the resident there. He had also told her that the police were coming and he was going to kill any of them who came after him. RCC officers were advised that the suspect had been spotted earlier that date leaving through the back door of a residence near his home and was known to have a large caliber handgun with him.

These officers were advised of the subject’s past actions and his potential for violence. Despite the danger presented by tracking him through the woods and the threat he made about killing anyone who came after him, these officers took up the track and performed their duty without hesitation. These officers then suffered through miserable freezing conditions to hold a perimeter around the suspect’s location until the situation was resolved.

The second incident began in the morning hours of June 18, 2018, when officers from the Lamar County Sheriff’s Office and Hattiesburg Police Department attempted to serve an arrest warrant on a suspect in a residential area of Hattiesburg, Miss. The suspect was a 23-year-old male who was wanted for three counts of aggravated assault on an officer. When the officers arrived at the residence to serve the warrant, the suspect opened fire with an automatic weapon on the officers, striking one officer in the upper thigh and in his ballistic vest. Gunfire was exchanged with the suspect however he was able to flee on foot into a wooded area behind the residence. Thankfully, the wounded officer made a full recovery from his wounds.

At the request of the Mississippi Highway Patrol, members of RCC’s K9 team responded to Hattiesburg to assist in the search for the suspect. After being briefed by members of the Lamar County Sheriff’s Office, the K-9 team deployed “Biggie” and “Jed.”

These officers responded to another agency’s request for assistance without a moment’s hesitation. They were aware that the suspect was armed with an automatic weapon and had already wounded a fellow law enforcement officer earlier that day. Despite the danger involved, they were focused on their mission and determined to prevent this individual from harming others.

The officers had earlier received the facility’s Warden’s Award of Excellence. Warden Robert Tanner commented on the recognition.

“I am extremely proud of the courageous actions of these officers,” he said. “They and their K9s train weekly to respond when needed and never hesitate to answer a call. These officers are among the best in the state, and I am grateful for their service to our facility and community.”