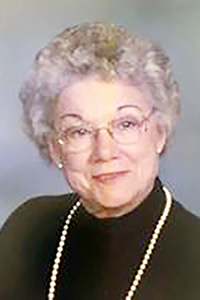 Peggye Smith Morris-Huddleston, a descendant of one of the first settlers at Arkansas Post, Joseph Bogy, and whose family has been active in the development of Arkansas for more then 200 years, died on Sunday, Nov. 24, 2019, at 5:46 p.m.

The daughter of Aubrey Clinton Smith and his wife, Adele Bogy Smith, Mrs. Morris-Huddleston was reared in Pine Bluff, Ark., and attended school there. Trained as a paralegal, Mrs. Morris-Huddleston was the first woman in the country to serve in the capacity of Executive Director of a state telephone association. She and her husband, Col. James O. Morris retired to Heber Springs, Ark., in 1979. Following his death Mrs. Morris-Huddleston became active as volunteer at Cleburne County Cares. in 1986 she married Jack D. Huddleston who preceded her in death in 2000. She was diagnosed with failing eyesight in 2012 and moved to Bogalusa, to be near her daughter.

She was a member of First Presbyterian Church of Bogalusa; Arkansas State Society, DAR; Oushola Chapter, NSDAR; Chapter 440 Order of the Eastern Star; T.J. Churchill, United Daughters of the Confederacy; Mary Place Chapter, Colonial Dames of the XVII Century; charter member of the National Society Dames of the Court of Honor; Tuscaloosa Genealogical Society Morning Group; Grand Prairie Historical Society; life member of Seven Springs Chapter of the Military Officers Association; Red Hat Society; and Friends of the Library of Cleburne County. She was a past state officer of the Arkansas State Society, DAR; Regent and current Registrar of Little Red River Chapter.

She is survived by her son, James Charles Morris and his wife, Anna Marie of Panama City, Fla.; her daughter, Audrey Denise Morris Cummings and her husband Wallace of Bogalusa; and also survived by her grandchildren, Jason Christopher Cummings, James Michael Cummings of Bogalusa, Christina Morris Royce and Kimberly Gail Morris Johnson of Florida; her brother, James Tandy Smith and his wife Lucinda of Claremore, Okla.; and also survived by 10 great-grandchildren and her beloved animals, Sudie, Sadie, and Pickles.

A private Graveside Service will be held at a later date in the Little Rock National Cemetery in Little Rock, Ark. She will be laid to rest with her late husband, Col. James O. Morris.

The family requests that memorials be made to the Humane Society of Louisiana, Magnolia Chapter, P.O. Box 854, Franklinton, LA 70438 or magnoliahumane@yahoo.com.