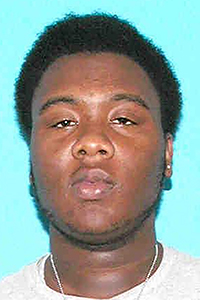 Parish man gets 70 years in prison for killing mother

District Attorney Warren Montgomery announced that Christopher Rashad Dillon, 25, of Franklinton, abruptly pleaded guilty Tuesday, near the end of his second day of trial, for shooting his mother to death and injuring two others, including a Franklinton police officer.

District Judge Scott Gardner sentenced Dillon to a total of 70 years in prison without the benefit of parole, probation, or suspension of sentence.

“I’m glad we were able to achieve some measure of closure for the family of the deceased,” Montgomery said, of the plea agreement.

On Dec. 19, 2013, Dillon went to a neighbor’s home and shot the man, while attempting to rob him. The gunshot shattered the victim’s right arm and forced him to have to learn how to use his left hand. Dillon then returned to his home two blocks away and shot his mother, Robin Dillon, as he rummaged through her purse. In a statement to a medical official, Dillon said his mother was shot as she grabbed for her purse.

Franklinton Police Department officers arrived at the scene, and Dillon pretended he was going to surrender to them. Instead, he fired a shot, striking Sgt. Chad Dorsett in the forearm. The bullet passed through Dorsett’s arm and was stopped by his bulletproof vest. Dillon prevented officers from entering the residence by claiming he was holding his mother hostage. Unbeknownst to officers, she already had been shot and lay dying on the floor of her bedroom. She eventually succumbed to her injuries. After about an hour of the standoff, Dillon started a fire in his mother’s bedroom, and crawled through his bedroom window as the trailer home became engulfed in flames. He was arrested by officers on the scene.

The Washington Parish Sheriff’s Office assisted on the scene, and the Louisiana State Police investigated the case, since it involved the shooting of a Franklinton Police officer.

Dillon initially pleaded not guilty by reason of insanity and was judged incompetent to proceed with the process. But an intensive review of his mental status by state mental health professionals later determined that Dillon was exaggerating the extent of his mental illness, and the case was sent back to District Court for trial. Assistant District Attorneys Casey Dieck and David Weilbaecher Jr. prosecuted the case.

The surviving victims and a relative of the homicide victim were present in court and supported the terms of the plea and the sentences.

A Jefferson Parish man was arrested Monday after attempting to cut Varnado Police Chief Louis Adams with a knife, according... read more