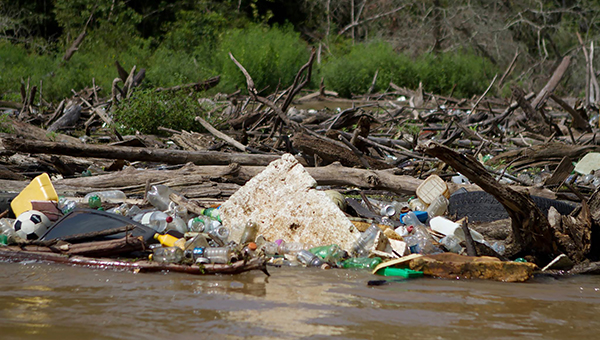 The logjam on the Pearl River includes natural and plenty of man-made trash, including appliances, televisions, butane tanks, gas cans, Styrofoam, and “thousands” of plastic bottles.

Louisiana is wilder than most states, and most residents consider that a blessing. The Pearl River, which acts as the border to Mississippi on the northeast, provides a home for alligators, and its surroundings provide shelter for wild pigs, snakes, and all manner of things that could pose a threat to the unwary. It takes some bravery to go out into the Louisiana wilds.

But the Pearl River is now threatened by a logjam of natural and man-made debris, said Abby Bramer, who was recently dubbed the Pearl Riverkeeper. Bramer said it has created an oxbow landfill several “several miles long,” which has rerouted the river, and continues growing at a rate of about half a mile every six months.

“Standing in a boat at the leading edge you can see two television sets, several large appliances, Igloo coolers, a propane tank, tires, thousands of plastic water bottles, large chunks of Styrofoam,” Bramer said. “This logjam is impacting the ecosystems of the Pearl River Basin, Old River (Wildlife Management Area) on the Mississippi side of the river and the Bogue Chitto National Wildlife Refuge on the Louisiana side of the river. Pearl Riverkeeper is working with local residents and (Louisiana State) Representative Malinda White to find a solution to this growing problem.”

The logjam is not news to White, who has a camp on the Pearl, nor to the citizen she considers her “boots on the ground,” Gary Parker. They are both on a mission to bring attention to the dangerous, massive logjam that could threaten lives.

The logjam is currently on the Mississippi side of the river, south of Poole’s Bluff.

White said she is concerned that if the logjam is not addressed, it will continue to cause residential and business flooding. It could also lead to contamination from debris containing toxic chemicals, could create safety hazards for boaters and gulf sturgeon that migrate for spawning, and could threaten oyster beds on the coastal region, as well as aquatic life, mussels, and multitudes of wildlife and bird species.

“It also limits access to fishing, hunting, camping and private landowners,” she said. “It has caused a decline of recreational use and damaged commercial needs on the river below the logjam.”

White said the unusually wet seasons and high floodwaters throughout the past few years have taken down “more than the average riverbanks,” filling the river with trees. She said she believes we are still feeling the effects of Hurricane Katrina, which traveled up the Pearl River taking down thousands of acres of trees. In addition, recent years of unseasonal flooding have continued to sweep through the swamps, pulling tree remains into the river.

“Unintentional items from under camps are also being swept into the river with the sudden and unexpected rise and fall of the river,” she said. “Camp/home owners are being asked to secure their properties, with the items stored under camps secured to prevent items from floating out into the river. And of course we have no shortage of people who don’t hesitate to toss litter into the flowing water. The logjam is a catch-all for debris coming down the Pearl from as far as the Ross Barnett Reservoir located in Jackson, Mississippi.

“There’s manmade and natural disasters that have created what I believe could possibly be an ecological disaster if it’s not dealt with,” she said.

White says more needs to be done on a larger, safer scale, with a holistic approach to the Pearl River and with agencies from Louisiana, Mississippi and Washington D.C. involved. And while those state and federal partnerships are being developed, the first partnership needs be with the public. White says citizens need to think about how they secure loose camp and houseboat materials, decrease on-site litter, and stay mindful of discarding trash properly while boating or tubing.

With that in mind, boaters and kayakers are invited to take part in the “Pearl River Clean Sweep” from the Mississippi/Louisiana state line located in Angie to Poole’s Bluff, by way of boat launches located at the Pearl River Bridge, Richardson’s Landing and Poole’s Bluff, on Saturday, Sept. 23. White is the designated site leader organizing the effort for community involvement. To register, go online to www.pearlriverkeeper.com  or stop by White’s office at 116 Georgia Ave. in Bogalusa.