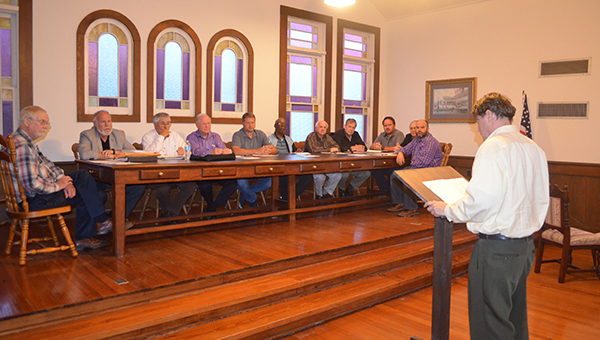 The first public meeting of the new Washington Parish Reservoir District Commission took place at the Washington Economic Development Foundation building in Bogalusa on Thursday, and the board took its first action. The commission was created in 2003 to study the feasibility of developing a reservoir in Washington Parish and to search for a potential site.

The project has since been mired in controversy since the selected Oak Grove site threatened to swamp residences, a cemetery, and a state highway. In June of 2015, the U.S. Army Corps of Engineers (COE) denied the permit for, among other reasons, being contrary to the public interest. In July of 2016, reservoir district attorneys learned they had won their appeal.

Commissioner Jerry Thomas said, “Would it not be better to build a small lake than a large lake? We need to come up with a plan we can go to the citizens with. If we have a room full of citizens against the project, it’s not going to work. I think this is a very worthwhile project, but we need to compromise. And we need parish president, parish council and legislative support.”

Thursday, the new commission was briefed on the district history by project engineer Randy Denmon of Denmon Engineering, and was given an update of its status by attorney Keith Turner of Watkins and Eager.

Commissioner Bob Bateman proposed that the commission allow the attorneys to proceed with negotiations with the COE under the new law that stipulates that no property appropriations may take place through eminent domain. Bateman added that the reservoir’s footprint, or size, could be reduced at some point in the future. His proposal was unanimously approved.

Commissioner John Nichols asked Denmon to provide the board with a plan for a smaller lake. He said, “We live here. We can tell what’s there.”

Phillipp Bedwell was the only member of the public to speak. When the board tried to go into executive session early in the meeting, he said that would violate the law because it was not noted on the agenda. Bedwell added that he would report the miscue to the District Attorney or the Louisiana Attorney General on Monday.

In September, Gov. John Bel Edwards reappointed four commissioners from the former board and appointed seven new freshman members. He chose from nominees submitted by Washington Parish President Richard “Ned” Thomas, each of the seven Washington Parish Council members, and the three members of the Washington Parish legislative delegation.