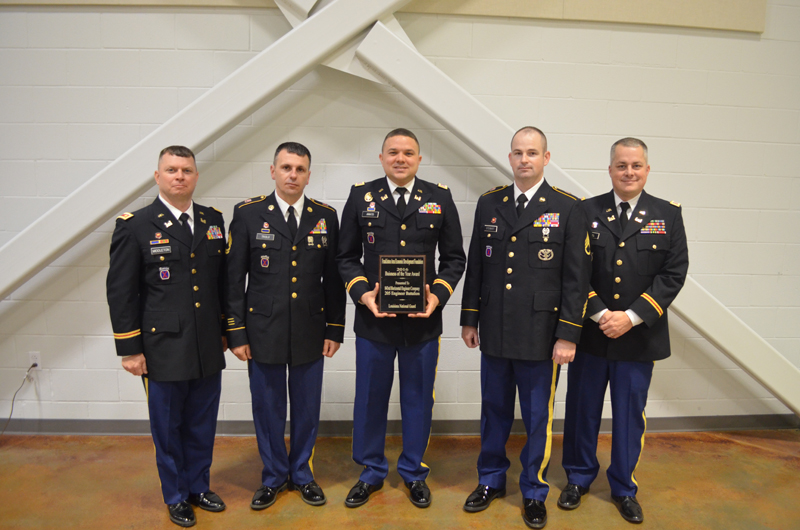 The dinner is an opportunity to nominate officers and boards for those organizations, but it is also a chance for citizens and business people to get an economic update on the year past and a forecast for the year ahead. Also during the night, the groups recognize a business of the year.

This year, the 843rd Horizontal Engineering Company of the 205th Engineer Battalion in the Louisiana National Guard received the Franklinton Area Economic Development Foundation’s business of the year award.

Captain Jason Amato, who spoke on behalf of the company, said the flood responses were “opportunities for the 843rd to help others and ourselves.”

He said the award was “a great honor.”

A bit later, Lt. Gov. Billy Nungesser, the speaker for the evening, explained a bit about his job in Baton Rouge. The lieutenant governor is in charge of tourism, among other things, and Nungesser has spent the last year exploring ways to bring in more money through tourism as a way to boost the state’s budget without raising taxes on residents.

Nungesser suggested the state is on track to have a banner year in 2017, because the state will host some major sports and entertainment events. In particular, Nungesser said New Orleans will play host to Wrestlemania in April. That WWE event is expected to draw quite a crowd.

“I understand the money that will gross over the five-day event is second only to a Super Bowl,” Nungesser said.

In addition, he said that city wooed two new airlines — British Airways and Condor — that will offer direct flights to Britain and Germany, respectively.

In addition, Nungesser said he’s hoping to induce more Louisianans to stay in-state when they vacation by targeted, in-state advertising touting the state’s attractions, including the state parks, which have historically cost more to operate than they have brought in.

Nungesser said that is changing, and that two state parks recently earned a profit.

“We’re not going to continue to go back to the taxpayers for money to operate these facilities,” he said.

Looking forward, the lieutenant governor said the state is facing another budget crisis, though it is smaller than last year’s, and he believes Gov. John Bel Edwards will call another special session. Nungesser closed by showing several tourism commercials.

After that, Ryan Seal the executive director of the Washington Economic Development Foundation, gave his report.

Seal began by saying that Edwards gave heavy scrutiny to the public money that is used for economic development including tax incentives.

“The new governor had a new philosophy about economic development,” Seal said. “He wanted to really dive deep into the budget to see how much bang for the buck we were getting.”

Seal said he believes the state is getting a good deal on tax incentives, as it keeps Louisiana competitive. However, he said it’s likely there will be tweaks in those incentives as lawmakers look at ways to save money.

Seal then gave a recap of last year’s economic activity. He pointed out that the flooding in March hit Bogalusa hard and one store, The Salvage Store, shut down its storefront on Richmond Street.

“He has committed to getting that store re-opened,” Seal said, of the owner. However, Seal added, the owner is looking at a new location. The owner of the Salvage Store operates a space at the industrial park and Seal said he’s going to add a cold storage facility that will likely bring 20 jobs. Seal noted that a cabinet maker is going to bring jobs as well.

Seal also talked about Franklinton and pointed out that town had a good 2016, getting a new pharmacy, dress shop and a small retail strip.

He closed by saying that in the last two years, over 151 homes were built in Washington Parish for a cost of $25 million in total and he is optimistic for the future.