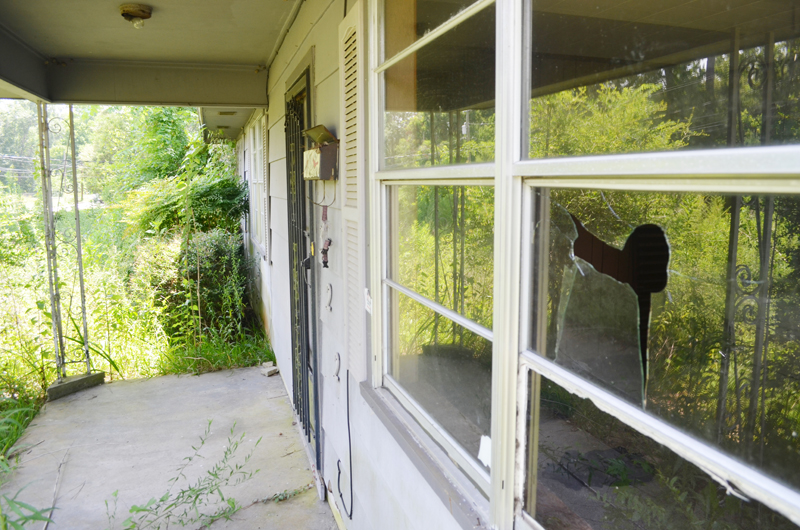 DAILY NEWS PHOTOS/Jesse Wright Broken windows and overgrown plants mark an abandoned house at 322 Caswell St. Civicsource recently sold the house at auction for a little more than $6,000, putting it back on the city’s tax rolls.

Just after 8 p.m. Wednesday, the house at 322 Caswell Ave. got something it hadn’t had in a long time — an owner.

It’s not clear who owned the home or when anyone last lived at the address. The unassuming residence is today hidden behind weeds as tall as a person. A window is broken. Around the side of the home, underneath the carport, a door stands open. The smell of mildew hangs in the summer heat.

But all that could change thanks to a bidder and the Civicsource program. Earlier this year, the city board allowed Civicsource, a private company, to auction off abandoned homes in Bogalusa. So far, Brian Danos, the chief information officer for Civicsource, said his company has auctioned several homes in Bogalusa and Wednesday’s auction was the latest.

By noon, the home had a single bid of about $5,300, but Danos said he couldn’t predict whether it would get higher.

“We usually see a good bit of bids right at the beginning, and a good bit of people usually wait until the very end, and it becomes very interesting,” he said.

That particular crept a bit higher and the house eventually sold for $6,010 after 66 bids.

City leaders agreed to let Civicsource auction off abandoned properties after dozens of such properties had piled up over the decades and, in those decades, the city had been able to auction not a single one.

Danos’ company might not be the cheapest way to auction property — they charge fees to the homebuyers — but they’re among the most thorough. While the city did not guarantee the buyer a title free and clear, Civicsource does, meaning that a new home owner can’t be challenged if the abandoned home owner’s relative should ever come forward to claim it.

Danos said his hope is that by searching for the rightful owners of the property, those people will come forward and claim their home.

“The best case scenario for everyone is if the delinquent home owner comes in and pays,” he said. “That’s what we’re hoping for. But there are times when delinquent owners just don’t pay.”

In those situations, the home is auctioned and this way the city can earn some money through property taxes.

Danos said by the time the homes go to auction, a buyer could have a new home free and clear within weeks.

“We try to close each property within the month,” he said.

Though the service has been available since March, the auction process is still new in Bogalusa because Civicsource only runs auctions once a month. Counting this week’s sale, they’ve only sold half a dozen homes.

“I guess we’ve done six so far, if you count the one today. That’s pretty good,” Danos said.

CivicSource operates auctions for cities across the state, including for New Orleans. He said he thinks selling six homes is good in a city the size of Bogalusa.

“Yeah, I mean, it’s hard to tell in smaller cities what the level of interest is,” he said. “I’ve gotten a lot of phone calls asking about it.”

He said he expects the business to pick up, as well.

“As they sell, and if they’re renovated, we’ll see interest pick up. Word of mouth travels pretty quickly in these smaller cities,” he said.

“There’s only one instance when the depositor won’t get their money back,” Danos said. “That’s if it goes to sell and nobody bids in the auction. That’s what the deposit is for.”

So far, there are three auctions in Bogalusa slated for August and one for September and October, respectively. The auctions are always on the first Wednesday of the month.