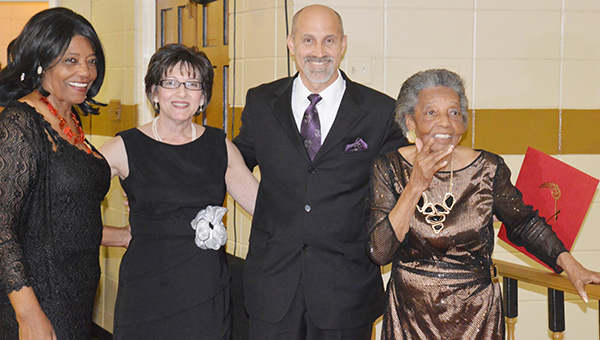 Barbara Hicks-Collins, chaplains Grace Hutson and David Ziegler, and Valeria Hicks smile during the Feb. 27 “Legends and Trailblazers” musical tribute. Hutson and Ziegler were recognized for their role in the “Pray for Bogalusa” rally at Cassidy Park.

On Saturday, Feb. 27, the B&C Hall on Cumberland Street in Bogalusa, was filled to capacity with citizens of Bogalusa and guests from Hawaii, Florida, California  Mississippi and surrounding parishes to be a part of the 40th National African American History Month — a red-carpet first annual musical tribute to honor “Legends and Trailblazers” by the Robert “Bob” Hicks Foundation.

Pastor Travis Houston started the tribute off with a welcome and a prayer.

“These honorees were selected because they had the courage to stand up and not give up,” said Barbara Hicks-Collins, executive director of the foundation. “It was their contributions, achievements and positive accomplishments that impacted the Bogalusa/Washington Parish community which opened opportunities for future generations.”

Area churches, the Washington Men’s Club and the executive board of the Hicks Foundation were involved in choosing the Legends and Trailblazers to be honored. Hicks-Collins said she was pleased with the large gathering and anticipates more people will be honored next year, as there will be more involvement and participation from parish churches.

Honorees included the late A.Z. Young, Gayle Jenkins, Lois Jefferson and Robert Hicks, for their leadership roles in the Bogalusa civil rights movement. Hicks was also honored for his pioneering role in the formation of the Bogalusa Deacons for Defense and Justice and civil rights lawsuits in the area of civil, human, social justice, fair housing and labor rights.

Young was a giant of the civil rights movement in Bogalusa. A former union leader and World War II veteran, he became president of the Bogalusa Civic and Voters League. He helped organized protests, marched on the front lines, and stood up to the power structure of the city. Young helped pave a way for future generations and later became one of the highest-ranking African-Americans in state government.

In the mid-1960s, at the height of the civil rights movement in Bogalusa, Jenkins served as secretary of the Bogalusa Voters League. She became an articulate voice of the movement, bravely stepping forth to tell the national media of the civil rights struggle in Bogalusa. She helped organize the protests and walked on the front lines with the male leaders. She dedicated her life to fighting for justice, ultimately winning election to the Bogalusa School Board and becoming one of its strongest leaders.

R.T. Young and Lois Jefferson were honored for their roles as civil rights activists in education, as well.

Jenkins’ awards were accepted by her grandson, Chad Harry. Jefferson’s award was accepted by her son, Marris Jefferson, who was one of the first students to integrate the all-white school in Varnado.  Valeria Hicks accepted the award on behalf of A.Z. Young, R.T. Young and Hicks. 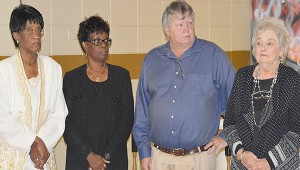 The first Washington Parish African-American sheriff deputies, Oneal Moore and David Rogers, were also honored. These deputies were ambushed in 1965 resulting in Moore’s death and the loss of one eye for Rogers. Rogers continued to serve as Deputy until 1988 when he retired as a captain. Rogers’ son, Larry Rogers, accepted the awards on behalf of his father and Oneal Moore.

Also recognized were all the youth of the Bogalusa civil rights movements. Hattie Mae Hill-Dillon accepted the award on the countless young people’s behalf, and was also personally honored as a living Legend.

Hill-Dillon, as a 17-year-old civil rights activist, helped form the youth organization that was involved in protests and boycotts of the school and was elected as their secretary. During the summer of 1966 in Bogalusa, she was wounded by a piece of medal that struck her in the head. Since the public state-funded hospital of Bogalusa wouldn’t treat protesters, other marchers tried to get her to the first aid station in the black community, but were attacked by angry white citizens. Shooting occurred and Hill-Dillon lives to tell the rest of the story.

Former CORE (Congress of Racial Equality) leaders Ronnie Moore, Bill Yates and Steven Miller were honored for their valiant work on behalf of the Bogalusa civil rights movement. Su Yates, the daughter of Bill Yates, accepted the awards on behalf of her father, Miller and Moore.

Also honored were The “Courageous 4” of Allen LeBlanc Sr., Douglas Show, Mr. Ward and Palmer Armstrong. The four men rescued a young 14-year-old African American teenager, J.R. Washington, who had been taken from his mother against her will and remained enslaved to the age 23 — nine years as a slave. 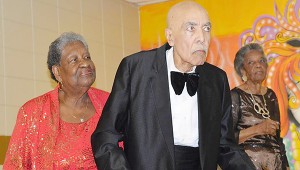 “We were delighted to have Allen LeBlanc III present, as his grandfather was honored for his courage,” Hicks-Collins said.

Also honored were the late Bertran Wyre Sr. and Willie Mae Wyre, a resourceful couple who played major roles in the civil rights movement — especially during the legendary 10-day, 105-mile march from Bogalusa to Baton Rouge. Their daughter, Burnadean Wyre-Warren, accepted the awards on behalf of her parents.

Two of the last few living members of the Bogalusa Deacons for Defense and Justice, Deacon Fletcher Anderson and Deacon Aurilus Reese Perkins, received standing ovations for their brave actions in defense of local families and civil rights workers.

Wilton Moses was honored as a living Legend and a Trailblazer and also received a standing ovation. Moses was the first to file a lawsuit against the Washington Parish School Board for racism against minority students.

Moses was a teacher and coach at Wesley Ray High School and formed the first football program. He has been a member of the Elks, the Masons, the Washington Men’s Club and served on the Children’s Hospital Board in New Orleans. He was also instrumental in restoring four black churches that had been burned down by the Ku Klux Klan.

Bogalusa Mayor Wendy Perrette, State Rep. Malinda Brumfield-White, Franklinton Police Chief Olander Smith and Lisa Frazier Page were honored as “Trailblazers.” The Rev. Dr. A.J. Luter was honored for his extraordinary legacy as a minister, author and academic; Melvin Keith for his work in founding the Washington Men’s Club, as a senior civil engineer at Temple Inland/International Paper in Bogalusa for 38 years and founder of the Bogalusa Little League Ball Park; and Orzia Mae Young Garrett, as one of the oldest members of the Bethlehem Baptist Church and a wife and mother who nurtured her family’s civil rights activism.

Washington Parish Sheriff Randy Seal and Parish President Richard Thomas were honored for their work and good deeds in the community; the Rev. Stanley Nathaniel for his role as an emerging leader in the African American community; and chaplains David Ziegler and Grace Hutson for their recent efforts to promote “Pray for Bogalusa.” Pray for Bogalusa was a day of reconciliation that offered the first ever official apology to African-Americans from Bogalusa for the acts of inequality perpetrated against them.

Entertainment was provided by Nicole Powell, Chad Harry and the Rev. Adrien Berry, who sang inspirational songs. Angela Magee also entertained the group on the flute. Liza Frazier Page was the mistress of ceremony and food was provided by Rachel Henry Catering.

Other volunteers included Eric Lewis, a resident of Florida, three of Page’s children and a friend, along with Hicks-Collins’ daughters and granddaughter.

Honorees were awarded four separate certificates — from the Robert “Bob” Hicks Foundation, the City of Bogalusa, Washington Parish government and Taylor Barras, Speaker of the Louisiana House of Representatives. Braumfield-White played an instrumental role in obtaining the certificates from Barras.

“It was a joyous and emotional occasion that lifted spirits and brought people together to honor those who made choices that will leave a moral legacy for future generations,” Hicks-Collins said, of the night.

Anyone interested in seeing the full event on DVD and purchasing a commemorative booklet filled with pictures and history of the 2016 Legends and Trailblazers can call The Hicks Foundation at 985-732-7449 for more information.