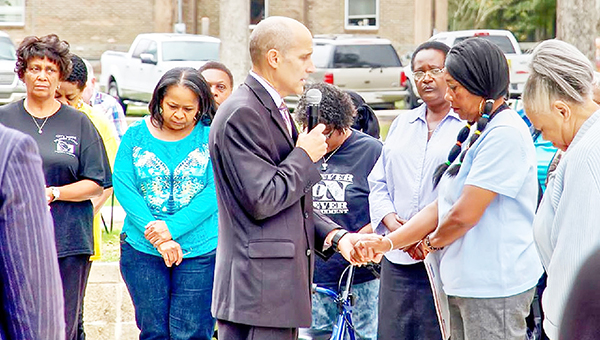 COURTESY PHOTO/Mike Price Chaplain David Ziegler offers a plea of forgiveness as he holds the hands of Barbara Hicks-Collins, the daughter of the late Civil Rights leader Robert “Bob” Hicks. Hattie Hill Dillon and other African Americans stand in a circle to accept the official apology.

The Robert “Bob” Hicks Foundation expresses gratitude for the historic apology that a number of Bogalusa elected officials and an interracial group of ministers issued to the city’s African Americans on Nov. 7 for the violence, inequality, and injustice inflicted on them in the 1960s struggle for equal rights and opportunities. The official apology was made—and a proclamation presented—during the “Pray for Bogalusa” event, sponsored by the ministerial group to bring racial reconciliation and healing to the city.
“I never thought I would see this in my lifetime—black and white residents of this city, holding hands, shedding tears together, trying to move past our past in the very park where some of these atrocities occurred,” said Barbara Hicks-Collins, executive director of the foundation named in honor of her late father, a prominent civil rights leader who received national acclaim.
Hicks-Collins’ family members were among the African Americans who were severely beaten by whites, resisting the efforts of civil rights protesters to integrate the park on May 19, 1965. “This park symbolized the battleground of hatred, racism, and inequality for those African Americans who tried to integrate it 50 years ago,” Hicks-Collins said. “The blood of my family, friends, and other African American men, women and children covered the grounds of Cassidy Park, and to this day, my mother still cannot step foot there. The pain is just that deep.”
Cassidy Park was one of a number of public places where civil rights protesters clashed in Bogalusa with members of the Ku Klux Klan, which fought the 1960s integration efforts with threats and violence. Those clashes drew the attention of the national media, federal investigators, as well as federal civil rights groups.
In her remarks, accepting the apology on behalf of all who suffered, Hicks-Collins called by name many of the African American families that were targeted and those who were injured or murdered. The Nov. 7 reconciliation event went a long way toward healing those old wounds, Hicks-Collins said.
Among those who attended were Bogalusa’s Mayor Wendy O’Quin Perrette, Sheriff Randy “Country” Seal, other officials, civic leaders, and a diverse group of pastors and residents from all denominations. The event was most poignant for some veterans of the Civil Rights Movement, including Fletcher Anderson, a founding member of the Deacons for Defense and Justice, the group of local African American men who organized to provide armed protection for civil rights protesters.
“The apology and the plea for forgiveness were so powerful,” said Anderson, who still lives in Bogalusa.
Hattie Hill-Dillon of Bogalusa said the event was rather emotional for her, too. She said she appreciated the efforts and felt the pleas for forgiveness and reconciliation came from sincere hearts.
Hicks-Collins said the Hicks Foundation is grateful that Chaplains David Ziegler and Grace Hutson had the vision to organize the event. It included passionate prayers from seven pastors and ministers: on Repentance, Chaplain David Ziegler; Reconciliation, Pastor Greg Whaley; Restoration, Pastor Stanley Nathaniel; Revelation, Rev. Robert Williams; Reclamation/Redemption, Pastor Michael Oree; Reformation/Refreshing, Elder Christopher Matthews; and Resistance of the Enemy, Pastor Travis Houston.
Hicks-Collins said that as a veteran of the Civil Rights Movement, she was especially proud to see a diverse group of the city’s residents standing in the “gap” for family members and friends who are deceased or were not able to attend.
“It was a very emotional experience for me to accept the apology on behalf of all the individuals who played such significant roles in our quest for equality and justice,” Hicks-Collins said. “Fifty years after so much suffering, the prayers of repentance, and the healing power of forgiveness replace the blood and pain with love, love for one another.”

Members of Bogalusa churches of various races and denominations surround a stage at Cassidy Park in Bogalusa, where city officials and an interracial alliance of ministers offered an apology for the way the city’s white establishment treated black citizens during their quest for equal rights and opportunities in the 1960s.