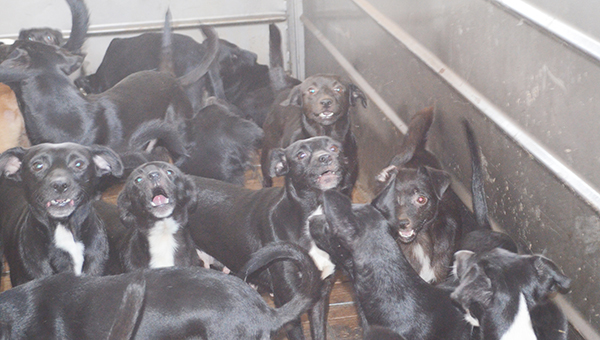 Shown are some of the 27 dogs that were confiscated from the home of a Bogalusa man, who was charged with animal cruelty. The Magnolia chapter of the Louisiana Humane Society and the Bogalusa Police Department are working together to find suitable homes for the animals.

On Sunday, Sept. 27, a complaint of foul odor emanating from a home at 613 Virginia Ave., led to the confiscation of 27 dogs from the home.

The home’s resident, 52-year-old Dean Miley, surrendered his dogs and was jailed on charges of animal cruelty and no rabies vaccination.

“I got a complaint of a bad smell at the house,” Bogalusa Police Chief Joe Culpepper said. “I sent a shift over there and they confirmed the problem. They tried to go in and check to see if any persons were there, but the smell was terrible.

“I called Animal Control Officer David Kellis. He couldn’t go in the house because the smell was that bad.”

Culpepper said the Bogalusa Fire Department came to the rescue and provided a breathing apparatus for Kellis. That was when Miley was discovered.

A horse trailer was acquired to store the dogs and they were being housed in the horse trailer near the Animal Control Facility behind City Hall as of Friday morning.

The Bogalusa Police Department is working with the Magnolia chapter of the Louisiana Humane Society to find suitable homes for the animals, mostly a terrier mix.

Miley was released from jail on a property bond and faces arraignment on Monday, Nov. 9.