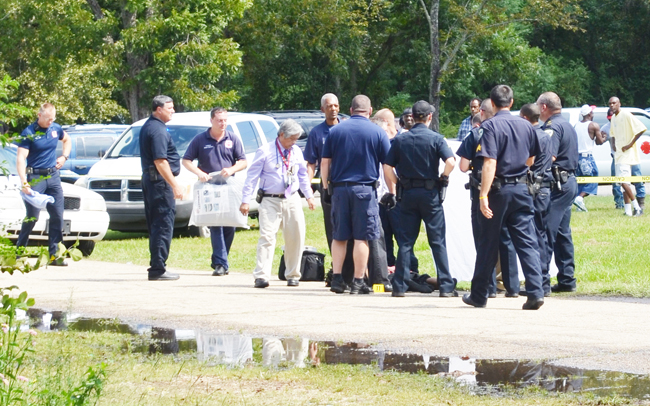 Bogalusa Police Department officials haven’t backed off from Tuesday’s description of a drug-related homicide of a Lumberton, Miss., man in the 700 block of East Fifth Street.

Washington Parish Coroner Dr. Roger Casama pronounced Trevante Martice, 21, of Lumberton, dead at the scene at 1:15 p.m. A call of a person lying in the street came into the BPD at 12:55 p.m.

Police are searching for two other individuals reportedly involved with the shooting. They are Brandon Lotts, 29, of Bogalusa, who was discovered Tuesday afternoon injured near Bennie’s Wings & Things on Martin Luther King Jr. Drive, and Thilonious Savoy Williams, 21, of Lumberton.

Bogalusa Police Chief Joe Culpepper described Lotts and Williams on Wednesday afternoon as “persons of interest.”  He said Williams was apparently in Martice’s car before the shooting.

“There is still a whole lot that has not been determined,” Culpepper said. “It was probably a drug deal gone bad. We’re in possession of some dope and some money left at the scene. We need to find these two individuals to get a clearer picture of what went on.”

Culpepper declined to be specific about the amount of money or drugs that were involved. He previously said there was a “mixture of pill bottles” discovered at the scene.

There were at least nine shell casings police marked as evidence near the home. Culpepper said there were “several casings from two different calibers.”

“I don’t know if they came to buy dope or rip (Lotts) off,” Culpepper said. “This might have been a peaceful transaction, but it didn’t happen that way. Further investigation in the case is definitely required.”

Culpepper said Martice’s family in Lumberton was notified of the death after he went home and told the family what had happened. The family came from Lumberton and identified the body.

Casama said the fatal gunshot wound was to the Martice’s back or mid-thoracic region. He said there was no exit wound. He said the bullet probably came from a small handgun.

Spectators watched as deputies investigated the shooting. Many wondered aloud as to why no blood was readily visible. Casama revealed the results of Wednesday’s autopsy.

“It was a very small caliber, probably a 38 or .32 caliber. There was practically no blood where he fell,” Casama said. “He fell face up in the prone position. He was probably shot from very close range — probably three to five feet. His thoracic aorta bled profusely and that caused immediate death.”