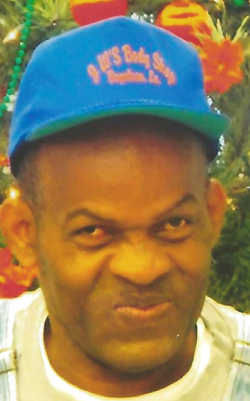 Deacon Kermit Blackburn, 61, of Bogalusa, humbly gave a silent sigh and went home to be with the Lord on the morning of Wednesday, Sept. 23, 2015, at his residence.

He was the seventh child born to the union of the late Emery Blackburn and Jessie Hendricks Blackburn on March 17, 1954, in Bogalusa. He was educated in the Bogalusa School System, starting at Central Elementary.

He united with the Bethlehem Baptist Church at an earlier age, under the leadership of Dr. Owens. He was a faithful, dedicated member, a member of Sunday school class No. 8, and always said the morning prayer until his health failed. He talked all the time of God’s love and for us to love one another as God loved us. On Jan. 18, 2015, he received an Honorary Deacon Certificate.

Visitation will be held Friday, Oct. 2, at the chapel of Crain and Sons Funeral Home in Bogalusa, from 2 p.m. to 6 p.m.

The funeral service will be held Saturday, Oct. 3, at Bethlehem Baptist Church in Bogalusa at noon, with Elder Christopher Matthews officiating. Interment will be in the Bogalusa Cemetery.