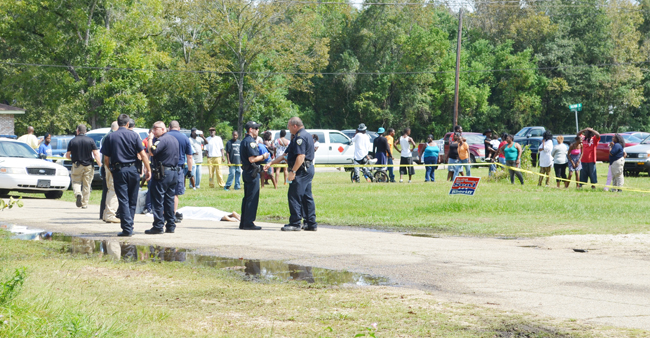 An apparent drug deal went wrong Tuesday afternoon and resulted in the shooting death of one man.

The body of a black man was found in the street in front of a house in the 700 block of East Fifth Street early Tuesday afternoon. The body was draped under a blanket as Bogalusa Police Department officers worked the scene. Another blanket blocked the view of a number of spectators at the scene. Some spectators wondered aloud if the victim was possibly one of their family members.

“We believe the person who was killed was involved in a dope deal on East Fifth Street,” Culpepper said.

One spectator said he heard a number of gunshots at approximately 12:45 p.m.

“The dude had to be running. I heard about 10 or 11 shots,” said the spectator, who declined to be identified. “I think this dude shot back three or four times. I think he tried to run in that pink house and couldn’t get in. That was when he decided to run and that was far as he got.”

There were at least nine shell casings police marked as evidence.

Culpepper said the fatal shooting was possibly related to another man, who was discovered injured near Bennie’s Wings & Things on Martin Luther King Jr. Drive. Culpepper said the injured man ran off, but was tentatively identified. Culpepper declined to give his name while the investigation is ongoing.

“We’re trying desperately to locate the injured man, because of the shooting but also to get him the medical attention he needs,” Culpepper said.

Culpepper said police seized money and drugs from the scene. He declined to say how much money was involved, but did say there “was a mixture of pill bottles.”

Culpepper said the dead man is likely not from Bogalusa.

“We’re working with Mississippi authorities on this case,” Culpepper said. “Very little is known about him, but reports we have say he is from Mississippi. We’ve reached out to Pearl River and Marion county authorities to try and get this person identified.”

Culpepper said his department would release more details as they become available.

“This is one of those things that will take us awhile to sort it all out,” Culpepper said.