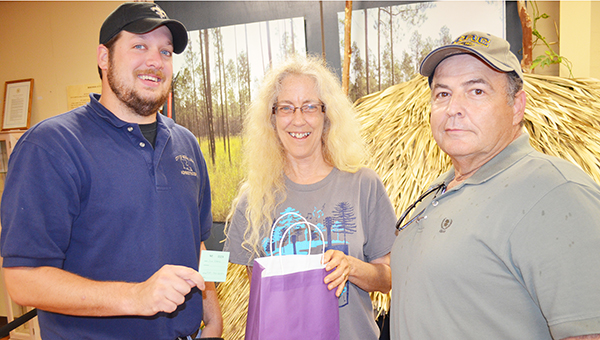 By Marcelle Hanemann
special to The Daily News

The City of Bogalusa Fund for Cassidy Park announced on Friday that Lockport’s Joe Clark was the winner of Friday’s drawing for the Sept. 19 LSU/Auburn football game tickets.

Children’s International Medical Group provided the tickets as a benefit for a small children’s playground at the park. We thank everybody who pitched in on the project by buying a ticket.

We also thank the two groups and handful of individuals who took part in the competition to sell the most tickets. The Bogalusa Rotary Club came in on top with 117 tickets, so two Rotarians will get a night’s stay at LaQuinta Inn and Suites in Biloxi, Miss. The Dogwood Ladies were close behind, selling 92 tickets, and won a room for one night. Children’s International also provided the hotel stays.

Now we’re going to raffle off 15 pairs of two-day passes to the Sept. 25-26 Bogalusa Blues and Heritage Festival for the same cause. Tickets will only cost $1. The drawing will be held on Sept. 21 and the winners will pick up their passes at the VIP/Sponsor gate at the festival.

Businesses who want to offer the raffle tickets at their locations, and everybody who wants to purchase tickets are encouraged to call Marcelle Hanemann at 985-750-6584.

Marcelle Hanemann is the Museums at Cassidy Park Director.