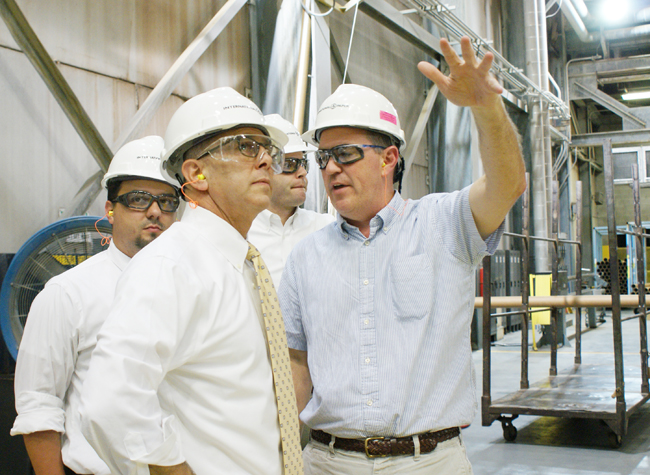 Boustany represents Lousiana’s 3rd District, which is located in the southwest region of the state and contains the cities of Lafayette and St. Charles. He has served in Congress since 2005 and is the senior member of Louisiana’s U.S. House delegation.

Boustany said he is touring a variety of economic sites across Louisiana, and picked the Bogalusa mill because of its importance to the entire state.

“It’s really a very impressive facility,” Boustany said. “It’s certainly an economic driver not only for the parish, but also for the state.”

Boustany began his visit to Bogalusa by meeting with some of the mill’s senior management, and then took a tour of the facility. During the tour, he had a chance to talk to a variety of employees in different departments. He also spoke with Bogalusa Mayor Wendy Perrette and other local government officials.

“I serve on the House Ways and Means Committee in Washington, D.C.,” Boustany said. “It’s an important committee because it deals with tax policy, international trade, and general economic policy. I’ve been working with a number of issues related to forestry and the timber industry, and I wanted a chance to see how those issues impact industry.”

“It was an honor to host Congressman Charles Boustany at the Bogalusa mill today,” said Bernie Chascin, Bogalusa mill manager. “He toured both paper machines and held a question-and-answer session with a group of our team members and Mayor Perrette.

“We appreciate his interest in our community and our industry, and that he recognizes the importance of manufacturing in Louisiana and in the U.S. economy.”