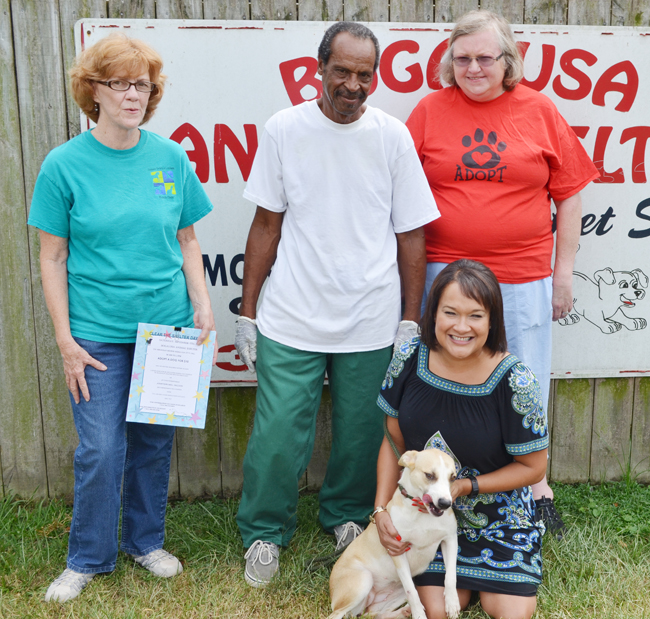 DAILY NEWS PHOTOS/Randy Hammons The Magnolia Chapter of the Humane Society of Louisiana and the city of Bogalusa are sponsoring “Clear the Shelter Day” from 10 a.m. to 2 p.m. on Saturday at the Bogalusa Animal Control facility at 214 Arkansas Ave. Bogalusa Mayor Wendy Perrette, foreground, holds a Panda Shepherd mix she named “Honey.” In back, from left, are chapter secretary/treasurer Kay Grantham, Richard Howard and volunteer Belinda Martin.

The Magnolia chapter of the Humane Society of Louisiana and the city of Bogalusa are making it easier for dog lovers to adopt a pet.

“Clear the Shelter Day” is scheduled for Saturday, from 10 a.m. to 2 p.m. at the Bogalusa Animal Control facility behind City Hall at 214 Arkansas Ave.

“People can look at the dogs in the facility when it’s open from 7 a.m. to 2 p.m. Monday through Friday,” said Kay Grantham, secretary/treasurer of the Humane Society chapter. “That is not convenient for a lot of people. Mayor Wendy Perrette and Animal Control Officer David Kellis wanted to see if we could do something a little more convenient.

“We’ll be doing pet adoptions on the first Saturday of each month. People will be able to come by Bogalusa Animal Control and see the dogs and play with them to see if the dogs fit their needs.”

If an animal is adopted, it will be given a distemper/parvo vaccination, a bath, a collar and leash and a toy. The adoption fee is $10.

State law requires dogs to be spayed or neutered within 30 days of adoption. The procedure can be done with the Magnolia chapter program for $65, or it can be done at any veterinarian. Proof of the completed procedure must be submitted to Bogalusa Animal Control.

“We want to get the word out so that people can start to learn they can come by and see the dogs there and play with them and possibly walk them,” Grantham said.

Bogalusa Animal Control has 14 runs for dogs. When the facility gets crowded, Animal Control Officer David Kellis has been known to double up the animals so the animals won’t be euthanized as quickly. Stray dogs are held for seven days before they can become legally adopted.

“We never have to kill a dog because we don’t have space for them. The city doesn’t have that option,” Grantham said. “Most of the dogs that go into the shelter are healthy and adoptable. They’re like your pet and my pet.”

Grantham said three out of four dogs in shelters around the country are pure breeds.

“Almost every breed you can think of has gone through Bogalusa Animal Control,” Grantham said.

The Magnolia Chapter of the Humane Society of Louisiana is a group of volunteers who have operated for seven years attempting to save stray dogs. They have had their successes.

“We have been working to pull dogs from out of the shelter since June 2008,” Grantham said. “For the last two or three years, we’ve made a big difference as we’ve managed to foster through our adoption program.

“Saturday’s adoption day just one more tool we feel will make a difference in the stray population of Bogalusa.”

The Magnolia chapter of the Humane Society is on Facebook. Grantham can be contacted at 985-335-0756.

Grantham said the group can always use additional volunteers and groups.

“We want to try and get additional groups like the Friends of the Bogalusa Animal Shelter so we can improve the facility and maybe take on some adoptions on another day,” Grantham said. “If another group could take on another adoption day, that would be helpful. If they’re not interested in adopting a pet on Saturday, they can come out and see how we operate.”